. Perhaps there is an assumption that the users of the Apple iPhone coming from certain circles, so anything with the Samsung Galaxy S III. 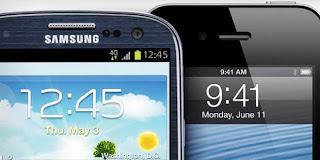 . Perhaps there is an assumption that the users of the Apple iPhone coming from certain circles, so anything with the Samsung Galaxy S III.

The marketing campaign was impressed by the two companies trying to convince users that they are unique, different from the others.

But a survey by Consumer Intelligence Reports reveal just the opposite. A typical iPhone user behavior and Galaxy S III may be similar or even exactly the same in terms of smartphone usage patterns.

"Users have the level of activity of both smartphone phone calls, send SMS, e-mail, and Internet access are the same," writes the information in the survey, conducted between January to February 2013, as quoted by AllThingsD.

Make a phone call is the most rarely performed by users of the iPhone and the Galaxy S III. The second smartphone users admitted more frequently to use the device to browse the internet and send SMS, as well as play games.

Slight differences can be found in the category of computer ownership type, in which there is one in five iPhone users claim to have a MacBook laptop, while users of the Galaxy S III, only seven percent have an Apple laptop that.

Thus even with Android tablets, where the Galaxy S III users likely have these devices two times larger than the iPhone users.

What about the previous devices owned by the user? As many as 60 percent owner of Galaxy S III claimed to have had Android smartphone while only nine percent claim to "change course" of the iPhone.

In contrast, iPhone users who already have an iPhone only amounted to 37 percent. As many as 20 percent said they moved from your Android device.

Posted by needsjobslowongankerja at 11:21 PM