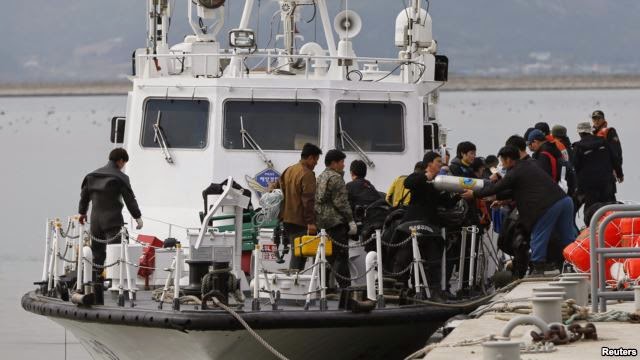 The South Korean divers have entered the sunken ferry Sewol to search for more corpses. The death toll in Sunday reaches 56 people, and another 246 have not been found. Most of the victims were high school students.

Hundreds of divers, including civilians who volunteered, fought hard against strong underwater currents and a limited range of vision to enter the ferry that sank on Wednesday with 476 passengers, off the coast of the island of Jindo, in the Southwest section.

Only 174 people are known to have been rescued, and yet another one is saved since last Wednesday.

South Korean prosecutors claimed Mualim 3, aged 26 years and left driving Sewol take the dangerous waters, the first time wading through the region when the fateful ship tilted to one side and sank.

Authorities also confirmed that the captain of the ship to be in the room when the ship began to sink, and let Mualim 3 inexperienced responsible for the shipping.

The ship's captain, chief officer and a crew of 3 was arrested Saturday on charges of leaving their passenger ferry when it sank.VOA
Posted by needsjobslowongankerja at 6:14 AM