Malaysian opposition leader, Anwar Ibrahim, calling the elections that just took place in the country as the mother of all forms of lies and deception. 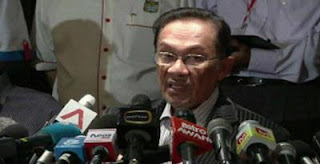 Malaysian opposition leader, Anwar Ibrahim, calling the elections that just took place in the country as the mother of all forms of lies and deception.

The statement was made Anwar, Saturday (11/05/2013), in front of tens of thousands of supporters who gathered in the State of Penang. The event was held three days after a massive rally near Kuala Lumpur.

Possible fraud, Anwar added, because the election authorities, Electoral Commission Malaysia, has to be biased. "Election Commission of cheating. Last election yesterday was the mother of all scams. We demand answers and we want it now, "Anwar said in front of his supporters.

Anwar and the opposition continues to hold a number of rallies to urge the Najib administration to explain a variety of fraud. The opposition has also promised in the near future will publish some evidence that fraud-related charges.

Najib administration has insisted that the elections are free and fair. With a victory this time, established itself as the BN regime in Malaysia uninterrupted since the country's independence from British rule in 1957.

Pakatan Rakyat opposition coalition, which consists of three opposition political parties, has been unable to follow the evidence and findings of fraud they earn.

They believe, both the courts and the Election Commission in Malaysia has been under the control and authority Najib regime.

Under such circumstances, in his speech, Anwar would indicate more effort into exposing the fraud and bias that occurs rather than take them to court.

Cheating is believed to be the case, among others, voter marker ink easily fade and disappear, and the deployment of "phantom voters" (ghost voters), mostly taken from the migrant workers, who were taken to a number of opposition electoral base.

Responding to lunge this time Anwar, Malaysian police said they could only take the orators in protest last Wednesday, near Kuala Lumpur for questioning on charges of inciting.

However, until now not a single step arrest or examination conducted by the police against the opposition leaders.

Meanwhile, in Singapore, police arrested 21 Malaysians on Saturday, which was illegally held a demonstration in the famous tourist district, Merlion Park, three days earlier. Their action aimed to protest the election results in Malaysia.

The protesters were arrested on charges of violating the rules of the Public Order Act and sentenced to six months in jail and a fine of 8,100 dollars.

They were also threatened with deportation and immigration blacklisted Singapore

Posted by needsjobslowongankerja at 8:55 PM