Minister for the Economy Hatta Rajasa said the government would immediately raise the price of fuel oil (BBM) subsidy if the Parliament approved the government's compensation fund required. 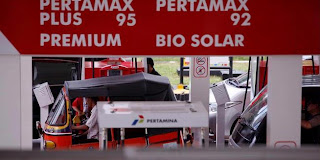 Minister for the Economy Hatta Rajasa said the government would immediately raise the price of fuel oil (BBM) subsidy if the Parliament approved the government's compensation fund required.

"So the increase in fuel prices that have a compensation package with funding," Hatta said when met at the office of the Supreme Court (MA) Jakarta, Friday (05/24/2013).

Currently, the House is discussing the Draft State Budget (Proposed) changes. Hatta expects the deliberation process to be completed no later than June 17, 2013.

On the other hand, is primarily related to the compensation fund request approval process for direct assistance while society (BLSM) is an important issue. Therefore, the program that is the starting point for enforcement of policies to raise subsidized fuel prices.

"So the issue is no longer agree or disagree. But how long (the House of Representatives decided the compensation policies," he added. Hatta hoped that the process of requesting approval by the compensation fund lawmakers could soon be agreed upon. Hopefully too, the House did not reject the government proposal.

"We do not want if rejected. Never suppose. Economic think we should not be brought into politics," he added. Just for the record, the government has reported a plan to raise subsidized fuel prices for premium Rp 2,000 to Rp 6,500 per liter and diesel rose Rp 1,000 to Rp 5,500 per liter. The plan would apply the policy in June 2013.

Posted by needsjobslowongankerja at 3:39 AM