Government of Indonesia and Australia to discuss settlement of the problem of human smuggling hurt both countries . 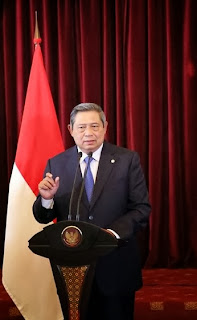 Government of Indonesia and Australia to discuss settlement of the problem of human smuggling hurt both countries .


Indonesian and Australian governments have agreed to come back to the settlement of the problem of human trafficking is detrimental to both countries . Going forward , there needs to be a more effective cooperation .

" It would be better if there is bilateral cooperation to resolve this problem as well as possible , " said President Susilo Bambang Yudhoyono during a press conference after a bilateral meeting with Australian Prime Minister Tony Abbott at the State Palace , Jakarta , Monday ( 09/30/2013 ) .

" We look forward to working with Indonesia on this issue in the future . Details are discussed Menkopolhukam ( Djoko Suyanto ) and the Australian border security officials , " said Abbot .

Separately , Coordinating Minister for People's Welfare Agung said the asylum seekers from various countries has become a burden on the government . Shelters in Indonesia has met foreign nationals . When there are problems at the shelter , he said , the government is to blame .

To that , add the Great , the government will return them to the country of origin . Other efforts, the need to eradicate mafia who played in the smuggling business . " Obviously there are mafia . Someone took advantage regardless of people's lives , " he concluded .

The event begins a state ceremony . After that , the two heads of government introduced a line of the respective governments . President was accompanied by the cabinet .

President Yudhoyono and Australian Prime Minister later held bilateral talks . According to the plan , there will be a joint press release . The event will end banquet dinner .

Presidential Special Staff for International Relations Teuku Faiza said , in a bilateral meeting , President Yudhoyono and Prime Minister Abbott will address priority issues within the framework of the Comprehensive Partnership that was built in 2005 . This, among other things, issues of economic , social , and cultural .

The two leaders will also exchange views on regional issues of common interest , such as cooperation in the Forum East Asia Summit , APEC , G - 20 , and the UN , as stated in a press release Faiza .
Posted by needsjobslowongankerja at 7:13 PM