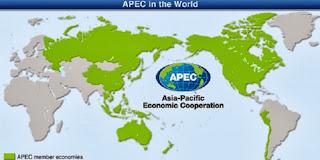 He said the non-oil commodities are quite prominent as crude palm oil and rubber industries each have export value of 5.5 billion U.S. dollars .

He also said that APEC is a forum which is quite important for Indonesia , although trade with APEC nations in 2012 had a deficit of 7 billion U.S. dollars .

To that end , Indonesia would continue to engage in and promote cooperation with APEC member countries . In this way the government can target the trade balance recorded a minimum the same as last year .

Until now, the APEC member countries continued to show growth . Thus, the free trade there are countries that will do the protection .

" It's the fact that we must look . For Indonesia , APEC is something that should be pursued export minimum lest we go down , if you can ride . APEC member countries there is a tendency of the most liberal protection . Interests us 140 billion dollars , if they are protective , interest we are at risk , "he continued .

However , until now, the government believes APEC member countries remains a promising market for Indonesian export market . "The portion of the world economy 55-60 percent of total world GDP . APEC GDP is now 33-35 trillion dollars , " he concluded .

One of a series of Summit ( Summit ) Countries Asia Pacific Cooperation ( APEC) meeting in Bali , at the upcoming October 5 to 9 , is the implementation of APEC - CEO Summit , which was attended by about 1,200 world -class CEO , or nearly double the than during the APEC - CEO Summit in Russia , in 2012.

Special Staff of the President of the Economic and Development Firmanzah rate, the high interest of the leaders of the global firms at the CEO summit this time not only as a positive signal for the implementation of APEC in Bali but also reflect the attractiveness of Indonesia as the organizer of the summit for the second time .

The CEO of Asia Pacific companies such as General Electric , CNN , DHL , Sumitomo , Bloomberg , Fedex , and so on , said Firmanzah , is a world -class corporation that plays an important role in the landscape of the business world today . Therefore , no exaggeration to the high interest in the implementation of the APEC - CEO Summit this time also brings high expectations for participants , including Indonesia .

" As a region which controls 56 per cent of GDP ( PPP ) or the world reached 46.6 trillion U.S. dollars by the end of 2012, the APEC - CEO summit meeting at a summit in Bali is expected to boost trade and investment areas as well as support the global recovery of world growth , " Firmanzah said as quoted from the pages of the Cabinet Secretariat in Jakarta , Monday ( 09/30/2013 ) .

Like the CEO Summit last year , according to Firmanzah , APEC CEO Summit 2013 is expected to result in a number of strategic decisions to continue to encourage the strengthening of the Asia-Pacific region amid the global financial industry turmoil recently.

Professor of the Faculty of Economics, University of Indonesia said the APEC CEO Summit 2013 with the theme " Towards Resilience and Growth : Reshaping for Global Economy " is scheduled to discuss a number of regional development programs and partnership opportunities that can be offered to the private sector to boost the region .

Cooperation and strategic partnership with the government is expected to push private agendas infrastructure and industrial development in the Asia Pacific region . " Dialogue between the government and the CEOs of global companies in Asia Pacific is a strategic step in discussing the dynamics of the world economy and the global business landscape , " said Firmanzah .

As the host of APEC this year , Indonesia proposed that APEC discussed and an agreement is grounded .

The agreement is very important at this time grounded . Indonesia's economy is suffering from the current account deficit and the trade deficit due to capital and financial account deficit indicates that the economy needed further transformation to be operational .

There are three priorities discussion meeting attended by the leaders of the 21 APEC economies and entities around 1,200 business leaders . First , implement the Bogor Goals agreement , namely the liberalization of trade and investment by 2010 for developed countries and 2020 for developing countries .

Secondly , realizing APEC's sustainable growth with equity . Third , the issue of connectivity ( connectivity ) , concerning the physical infrastructure as well as ease the traffic of people, goods , and services . The three priorities of APEC discussions relating to the Medium Term Development Plan 2009-2014 Indonesia .

APEC does give enormous opportunity for economic growth in Indonesia . Free trade and investment in theory gives members access to products entering the market every other member without a hitch . Rates among APEC members on average down to around 6.8 per cent of 16-17 per cent in the last 15 years . Heavy foreign investment to Indonesia until the middle of last year , mostly from members of APEC .

Second priority , to discuss , among other things , the issue of food security , renewable energy , marine , competitiveness of small and medium enterprises , to increase the participation of women in SMEs , as well as financial inclusion . This includes also discuss traditional medicine and medicinal plants for health .
food

Irony that Indonesia as an agricultural country experienced food shortages , reflected , among others, from price fluctuations over time . This situation is detrimental to farmers as producers and consumers .

The grounds stabilize prices and prevent inflation , the government intervened specifically regulate the import of soybean and beef , including garlic , pepper , and red onion .

Inability to increase production to make Indonesia the market for food products from outside the result of eliminating the economic and employment opportunities in the domestic farmers .

There are many things that must be resolved to allow Indonesia to compete in the APEC . Intake technology and innovation can not be compromised , especially appropriate . It 's starting to lose lower yields , extend shelf life , guaranteed prices for farmers - producers immediately implement warehouse receipts , for example - to food safety .

Indonesian farmers to compete with farmers in rich countries although highly efficient production , especially rice farmers . Rich country farmers got subsidies from the government in the form of a very large direct subsidies , in addition to costs for research and development , infrastructure , insurance , and protection of the product from the outside .

KOMPAS / FERGANATA INDRA RIATMOKO Illustration
In Indonesia , agro- food face high costs . Half due to political costs , only 30 percent of the real costs incurred farmers , and 20 percent due to inefficient infrastructure .

Issues facing the food sector also occur in other areas . A number of regulatory perceived discrimination and hamper businesses in the country .

Financing and financial inclusion , for example , is still a problem . In addition to the conditions as the island nation is a challenge in building infrastructure , human capital is also a constraint in access to formal financial services .

Connectivity issues are discussed in the country since May 2011 through the Master Plan for the Acceleration and Expansion of Indonesian Economic Development to this day still halting its implementation . From the government side , the financing to build infrastructure be a constraint , but also private sector is not interested to invest immediately because it requires legal certainty and ease of doing business from central and local governments .

More inward-looking tendency , for example , policy kabotase , though aims to foster logistics industry in the country , on the other hand reduce the competitiveness of Indonesia . This is due to only a few were allowed into the harbor entrance - exit of goods from outside Indonesia .

Trade data shows that the contribution of international trade in the economy is still 15-16 percent smaller when compared with other countries . Indonesia also has not been entered in the global value chain of industrial products , except for a garment whose value is lower than other manufactured products .

Although the theme of sustainable and equitable economic growth , in fact , the issue of translating each country according to their own interests . This is reflected in the United States has not been agreed by the palm oil in as environmentally friendly products . CPO exposed to solar energy power plants in the context of renewable energy . Was in negotiations at the WTO for agricultural products trade dispute , Indonesian trading partners do not want to implement the repeal tariffs on imports to the country .

There are advantages APEC is a forum of cooperation is not binding . Indonesia can learn a lot from fellow members , especially in increasing capacity . The hope , of learning , and then applied to immediately go up a class, not just a list of chores .
Posted by needsjobslowongankerja at 8:39 PM