conflict between Islamic and secular forces in Egypt, the military and the opposition and Islamist groups who led the Muslim Brotherhood and Salafi groups in Egypt. 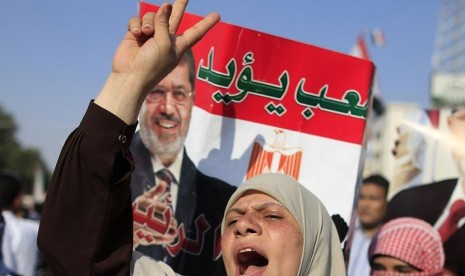 conflict between Islamic and secular forces in Egypt, the military and the opposition and Islamist groups who led the Muslim Brotherhood and Salafi groups in Egypt.

Secular groups that supported the United States with the financial support of the monarchy in the Gulf and Islamic groups.

Increasingly powerful Islamist forces in the Middle East after they won the Palestinian elections in which Hamas won, followed in Egypt, but later tossed in secular groups, so that led to a prolonged crisis in Egypt.

Indonesian National Human Rights Commission appealed to the world community to condemn the military coup against the legitimate and sovereign government in Egypt.

Commissioner of National Human Rights Commission, Maneger Nasution, assess the military coup that took place in Egypt is a betrayal of the democratic values ​​that have become the norm universally.

'' I regret UN double standards through its secretary general about the coup in Egypt. Ban Ki Mon "let 'coup in Egypt and see it as a form of expression freedom of speech. In stark contrast when a military coup in Niger (2010) EU, U.S., and France called on Niger to speedily restore order Constitution,'' said Nasution Maneger to ROL, Monday (8/7).

In 2012, he said, the United Nations condemned the military coup in West Africa, Mali.

'' The western countries also Tweedledum and Tweedledee, on the one hand glorifying democracy, but in the case of Egypt is only silence. So why in the event of a coup in Egypt all the silence? What is this? "

It is also hoped the President provided (again) more businesslike attitude anymore about the Egyptian crisis, because fatsun Indonesian politics is a free and active. Indonesia should play an active role in creating a world order as mandated in the 1945 Constitution.

Egyptian President Mansour Adly, on Thursday pledged to fight for the restoration of security to the end when the Muslim Brotherhood vowed new protests against the new military-installed government.

"We are at a defining moment in the history of Egypt, which some people want to drive to an unknown direction," he said in a televised address. "We'll fight the fight for security to the end. We will preserve the revolution."

Mansour, a high judge who was appointed as interim leader after the military overthrew the elected president Mohammed Mursi on July 3, again offering "olive branch" to the supporters of the Islamist Mursi.

However, he also promised to transitional justice amid cries prosecution Mursi and the crackdown on the Muslim Brotherhood movement. "The framework of justice and reconciliation extends to all directions," he said.

The Muslim Brotherhood has refused any dealings with Mansour. They said it would continue to protest until Mursi returned to his position.

He said he has called for a new demonstration on Friday. Groups of anti-Mursi called the counter-demonstration.

UN Secretary General, Ban Ki-moon on Thursday (11/7), expressed concern about the crisis in Egypt and the arrest warrant issued against the leader of the Muslim Brotherhood and others.

Ban expressed concern during a phone conversation with Egyptian Foreign Minister Mohamed Kamel Amr. Ban said there was no place for retaliation or exclusion of the public or the main party in Egypt.

'' Ban also called for peaceful dialogue that includes all parties in the political arena in Egypt,'' Xinhua reported that monitored Reuters on Friday morning.

He stated that the United Nations fully supports the Egyptian government responsible to the people of Egypt.
Egypt's Attorney General previously issued arrest warrant for the leader of the Muslim Brotherhood, Mohammed Badie, and other figures on Wednesday (10/7).

They ruled arrested on charges of instigating violent clashes on Monday. Clashes that eventually killed at least 51 people outside the House Republican Guard.

The tragedy occurred two days after the supreme leader of the Muslim Brotherhood, Mohammed Badie, delivered a fiery speech in front of an angry mob at the Roundabout Al-Rabiah Adawiyah in Cairo. He vowed to make sacrifices for the return of the Mursi and denounced the military action as a coup.
Posted by needsjobslowongankerja at 12:55 AM