Egypt split into two groups and the Egyptian Military panic. 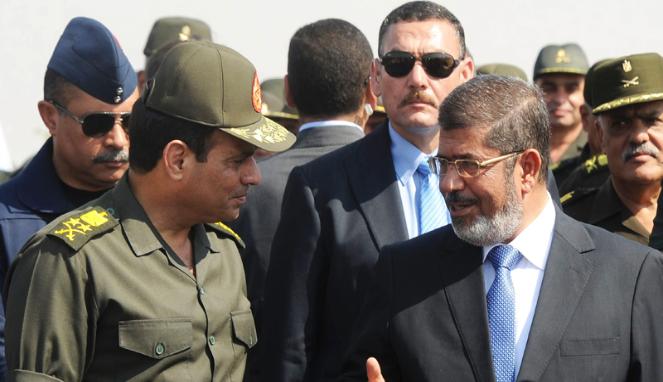 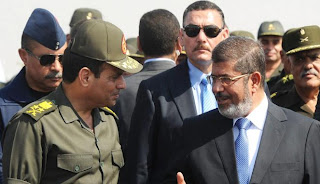 Egypt split into two groups and the Egyptian Military panic.

Invitation was even more exacerbated divisions in Egypt so that the Egyptians are split in half and further away from democracy, sehinnga clerics like Yusuf Qaradawi asks Egypt's military to restore power back to being the President of Egypt Mursi valid and legitimate.

Yusuf Qaradawi and senior clerics at Al-Azhar calls on Egyptians to unite to restore a healthy democratic life in Egypt in accordance with constitution has no power by violent means such as a coup similar in ways unhealthy and undemocratic.

Clashes between anti-and pro two camps of former President Mohammed Mursi broke out in several cities across Egypt on Friday. Nine people were reported killed, while more than 200 others injured.

According to Reuters, the victims died mostly from Alexandria, Egypt's second largest city. Al-Ahram reported, clashes occurred when mass anti-Mursi who fronted the military did a long march. Egyptian theme of their action is against terrorism.

When running in Mahatet Al-Raml, they met with mass pro-Mursi Mosque in Al-Qaed Ibrahim, the inevitable clash. One of the victims was 14 years old, was stabbed to death in her stomach. One other victim was shot in the head.

Clashes also occurred in Cairo, Damietta, Gharbiya and Sharqiya in the Nile Delta. Many were injured due to the mass of pellets from shotgun bird shot and a stone's throw from the top of the building. A total of 274 people were injured.

Mass anti Mursi took to the streets after getting the green light from the Egyptian military leader Abdel Fattah El-Sisi on Wednesday. He called on people to protest and support the military in attacking violence and terrorism after the overthrow of Mursi.

Call for this demonstration coincided with a massive action plan that considers the Muslim Brotherhood Mursi illegally deposed and demanded he be returned to the reins of leadership.

The Muslim Brotherhood has been waging in several cities after Mursi overthrown. The new Interior Minister Mohamed Ibrahim, said that the action would be immediately terminated in accordance with the law.

In his Facebook account, the Brotherhood said that the military increasingly aggressive. The military, they said, stormed their camp at night.

Previously, severe clashes occurred in front of the headquarters of the Revolutionary Guards, where Mursi allegedly detained. A total of 54 members of the Muslim Brotherhood was sprayed with bullets killed.

The Egyptian military decision to remove the majority of the legitimacy of the Egyptian people who deposited the records Mursi became fused betrayal of democracy Egypt.

Because the government only a year old, the struggle to restore stability Kinanah the country in the hands of the military must be stopped. On the other side of this decision benefits only opposition is not ready to accept the reality of democracy.

There are those who have feared would steal the revolution and now there along the line of the people who want it crashed.

As a manifestation of his love for the people of Egypt, Dr. Mursi took time to convey some messages and responses related to military decisions. Here is a summary of responses President Mursi:

1. I was legitimate and authorized the President, elected directly by the people of pre / post-military statements

2. It was a coup attempt. But I still advise that the stability of the country's security is maintained

3. I appeal to all to avoid conflict, and to shed the blood of fellow

4. Our Revolution (January 25) has been stolen by the old regime and the opposition

5. Several measures have been offered to complete the goal of the revolution among Pileg Jurdil, Dialog etc.. But rejected

6. It is an attempt to steal our revolution pure (January 25) that we went back to the beginning and ignore all capaian2
7. I say should be implemented legislative elections were honest and fair with military surveillance and MoHA

8. January 25 revolution was the desire of the people, how can the desire is forgotten in just 1 year?

9. I will not give legitimacy to a new legitimacy. Because of the danger

10. If this is allowed, the law will always be violated. Each month there will be a new law for the sake of removing the old one-sided

11. We all love Egypt. I say again, there is no substitute for a legitimate law

12. I admit the existence of the rejection, but I also see the support that is no less great for the legitimacy of the Law

Thus the summary of responses after the release of President Mursi Egyptian military statement.

Egyptian court issued an order to detain former President Mohammad Mursi for 15 days pending an investigation into allegations that he called a spy for the militant group Hamas.

News station Al Jazeera, Friday, July 26, 2013 launch decision was issued by the court today. According to information from the authorities, the decision was taken by Justice Hassan Sammir, who investigated the allegations against Mursi.

The report comes as supporters and opponents of the Mursi is preparing to hold a massive rally nationally appropriate Military Commander calls and Egypt's interim defense minister, Gen. Abdel Fattah al-Sisi. At the same time the Muslim Brotherhood (IM) also called for the same thing for the sake of promoting the future of Egypt.

But until now the existence Mursi is still unknown. Many people suspect he was detained at the headquarters of the Republican Guard. Foreign Ministry spokesman, Badr Abdel-Atti on July 10 and it has been confirmed that Mursi is now in a safe place and treated well.

Responding to the court's decision, a spokesman for the group IM, Gehad El-Haddad, said that Egypt had begun to return to the old regime when Mubarak ruled.

"The charges were read to them as a revenge of the old regime," said El-Haddad.

The court decision is a continuation of last month's statement called IM group working with groups Hamas and Hezbollah to attack the Wadi el-Natroun prison in 2011 ago. At that time high of 34 members including former President kelomok IM Mursi successfully released from prison.
Posted by needsjobslowongankerja at 11:06 PM