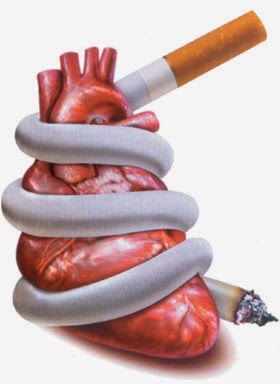 Findings should be a warning to 1.1million 'part time' smokers, say doctors

Study was commissioned by the charity to mark No Smoking Day.

Being a ‘social’ smoker puts you three times more at risk of dying from heart disease, warn doctors.

Just one cigarette a day can triple the risk compared with people who never smoked, says the British Heart Foundation (BHF).

They say the research should be a warning to the 1.1million ‘part time’ smokers in the UK who are ‘fooling themselves’ over their health.

Researchers found smoking between one and four cigarettes a day significantly increased the rate of heart disease, and deaths from all causes.

Lung cancer rates also went up in women who were smoking at least one cigarette a day, says the research commissioned by the charity to mark No Smoking Day next week.

Yet only a quarter of part-time smokers are worried about harming their health despite getting through an average 37 cigarettes a week.

Dr Mike Knapton, associate medical director of the BHF, said Britain’s 1.1million part-time smokers are fooling themselves if they think the health risks don’t apply to them.

He said ‘This research shows that many part-time and social smokers are still smoking enough every week to put their lives on the line. We need people to face-up the deadly risk they’re taking from social or part-time smoking..

There is no safe level for smoking - the evidence is unequivocal - and I was surprised at the effect.

‘Most of the research has been done on heavier smokers but when you look for the data it’s there.’ The research, carried out by world leading smoking expert Professor Robert West of University College London, is the first to look at the myths surrounding non-daily smoking..

The BHF estimate there are 1.1 million part-time or social smokers in the UK who give a range of excuses for smoking despite not reaching for a cigarette every day.

More than one in three believe it’s a stress-buster while almost one in five find it helps them socialise, says the study of 3,525 non-daily smokers.

Just one in seven part-time smokers say they feel addicted to cigarettes, compared to more than one in three (38per cent) daily smokers.

An average part-time smoker spends almost £800 on cigarettes every year. Professor West said: ‘The truth is that everyone who smokes can benefit from stopping - even if they don’t smoke every day.

‘The science of stopping tells us that there is no single method that works for everyone but there are things that will make lasting success more likely.

‘That includes getting free professional advice from a trained stop-smoking advisor through the NHS.’

Jenny Hall, 28, a market researcher from London, has been a part-time smoker since she was 13-years-old.

She said ‘Some weeks I smoke two or three cigarettes a day but I can go also for a whole week without lighting up at all. I don’t smoke at home as it tends to be centred mostly on social arrangements.

‘I’ve never felt like I smoke enough to worry about the impact on my health and I’ve always told myself that I’ll give up at some point in the future when I’m pregnant.

‘It surprised me to hear about the heart health risk as I’ve always linked smoking to cancer and that’s not something I worry about right now. The research has definitely made me think twice about how much I smoke.’ Chief Medical Officer, Professor Dame Sally Davies, said ‘Smoking is a major cause of premature death, with one in two smokers dying prematurely from smoking related diseases. It is extremely worrying that people still underestimate the harm it can cause to their health - even if you are only smoking a few cigarettes a day.
‘The first day without cigarettes is often the hardest, which is why on No Smoking Day we are giving smokers thinking about quitting support and motivation through ‘One Day Quit’, to help them through their first 24 hours smokefree.'| http://www.dailymail.co.uk/
.
Posted by needsjobslowongankerja at 8:44 PM