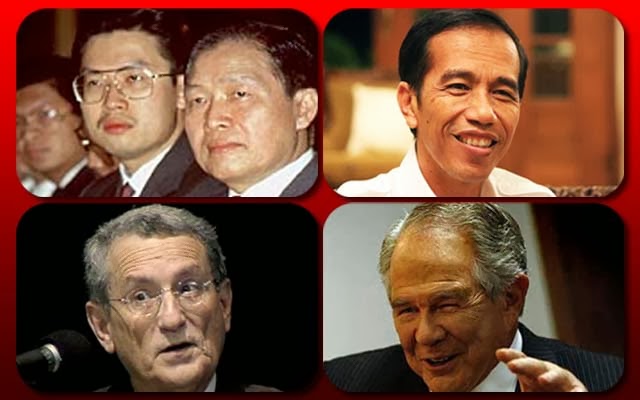 
ASATUNEWS - In order to encourage the popularity of the Governor of Jakarta to the highest point , all the way done by Bernard Stanley ' Stan ' Greenberg , a political consultant , Pollster , strategist winning election - presidential bully in the world , which has been proved to act as ' a director or brains ' behind the soaring popularity of engineering and imaging Jokowi over the last two years .

With quibble show results, Stan Greenberg , the Democratic chairman of the Corps of the United States ( U.S. ) , sidekick Indonesian tycoon James Riady, who both also are members of the elite Arkansas Connection , an organization that is very influential in the U.S. , trying to deceive the public deceptive guise of Indonesia by promoting Jokowi research institute of research results .

Stan Greenberg said electability Jokowi mid- September 2013 amounted to 68 % , whereas 28 % PDIP won electability . Greenberg as - if the conclusion of the study, that the reason is because the respondents chose Jokowi figure Jokowi honest and trustworthy .

According to pollsters and political consultants who controlled the U.S. Democratic Party , the second highest position after Jokowi electability is Prabowo ( PS ) 15 % and Bakrie ( ARB ) 11 % .

Medium elektablilitas parties , after PDIP , Golkar followed by 18 % , Gerindra and Democrats alike - to achieve the same 10 % .

Prof. Dr. Iberamsyah , Professor of University of Indonesia ( UI ) that follows the presentation a few months ago , said the survey results are not too surprising , because it is reflected in the number of institutions during this survey . At that time, the position of Stan Greenberg has not been publicly known as a political consultant and engineering brains popularity and electability for Jokowi false .

" The presentation last week , do not be done openly , because this survey is the order of an institution , not Stan Greenberg initiative , " said Iberamsyah at the end of September 2013 .

The issue now is that sticking the public doubts the entire survey , poll or polls when associated with Jokowi . The collapse of public confidence in the agency survey that assesses Jokowi due to the fact that Stan Greenberg has been known to the public as the mastermind of the whole engineering popularity and electability Jokowi .

In addition , the fact Jokowi poor performance , reflected in the failure Jokowi maximally absorb local budget ( only 55 % , the lowest of all provinces in Indonesia ) , stagnant program - regional development programs , as well as the inability Jokowi fulfill promises - promises campaigns are saying during the last elections in 2012 .

To severe flooding in Jakarta and traffic congestion is getting worse , causing the people of Jakarta increasingly negative assessment of the performance of Jokowi . As a result, the popularity of Jokowi in the middle - the society is getting drowned .

Meanwhile Chairman PDIP , through impressions ' Mata Najwa ' on Metro TV on Wednesday ( 22/1 ) , confirms Jokowi PDIP would not run for president and asked him to focus on completing the task as Jakarta governor for five full years . | Ba/021

Posted by needsjobslowongankerja at 8:48 AM