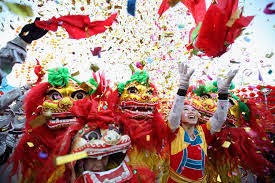 Chinese New Year falls on January 31, 2014 also marks the arrival of spring , when the various festivals in the existing temples in Beijing .

Beijing residents usually visit the temple after stay in touch with family and friends , split red envelopes containing money called Hongbao and enjoy a dish of fruit and food symbol of prosperity , such as dim sum or jiaozi .

Most people in Beijing came temples that hold the spring festival circuit , including the temple Changdian .

At the pagoda , among other residents were treated to a dance performance to mark the entry of horses Wooden Horse Year .

Changdian temple has some traditional Chinese antiques stores that are mostly made of jade , as well as Chinese calligraphy , and watercolor painting .

In the Ditan temple , residents are reminded again on all matters relating to the heyday of the Qing Dynasty , including through a variety of typical Chinese snacks and a special Beijing .

Even more spring festival with various activities that essentially invites members of the community , especially young people , to know the history of China that has hundreds of thousands of years .

New Year celebration in the Chinese calendar calendar lasted for 15 days which closed the festival lanterns .

In addition to visiting the festival circuit in some pagoda spring , residents of Beijing and surrounding areas are also enjoying a holiday by visiting a number of attractions such as Tiananmen Square , the Forbidden City complex , and the Beijing zoo .

Some residents also enjoy the holiday by lighting firecrackers and fireworks , although with a limited number and corresponding time set by the government to reduce air pollution levels .
Posted by needsjobslowongankerja at 2:48 AM