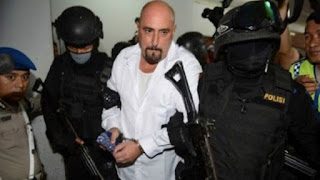 
Serge Atlaoui arrested at a place of manufacture of ecstasy in Tangerang in 2005.
Attorney General declared the execution of death row inmate drug cases from France, Serge Atlaoui, will wait for the month of Ramadan is over.
The plan was put forward after the Administrative Court rejected the lawsuit Serge Jakarta, on Monday (22/06).
The reading of the verdict of the State Administrative Court judge who presided Sonny Abdullah sentenced to death lawsuit marks the rejection drug cases from France, Serge Atlaoui.
Previous Serge sued Joko Widodo Presidential Decree No. 71 / G / 2015 which refused the pardon.
After Serge certain legal steps deadlocked, a spokesman for the Attorney General, Tony Spontana, said the men arrested in an ecstasy factory in Tangerang in 2005 is going to be executed. It's just waiting for the month of Ramadan after its implementation.
"For the implementation of the execution, we can ensure that in the near future, not in the month of Ramadan this. According to you, wise [wise] not execute in the month of Ramadan? Not right? Yes we wait after the fasting month is yes," said Tony told the BBC Indonesia, Jerome Wirawan.
The question whether Serge Atlaoui joint group on death row were executed later, Tony did not rule.
"We now collect and inventory the other death row legal process has been completed, then the rights already granted, Reconsideration already, denial of clemency has been. Maybe we make the implementation of the execution," he said.
null
Serge Atlaoui and Mary Jane Veloso was originally to be executed in reclaiming alongside other death row in April.
Ambiguity
Such attitudes, according Poengky Impartial Indarti of institutions that fight for the abolition of the death penalty, reflecting ambiguity.
Poengky refers to the fact that on the one hand the government uses religious rules when deciding not to execute in order to maintain the sanctity of Ramadan. But on the other hand government action in removing the lives of people against religious teachings.
"When using the pretext of religion, should the government not to execute," said Poengky.
Poengky added Mary Jane Veloso case should be a lesson for Indonesian law enforcement officials, including President Joko Widodo, not rashly run death penalty and refused to grant clemency.
"So we questioned the clemency rejection. Therefore, the president is no reason, no consideration whatsoever, direct signatures. As if these administrative problems alone. In fact, there are so many issues surrounding these cases," said Poengky.
null
Mary Jane Veloso execution postponed after a woman in the Philippines that he trap Mary Jane to be a drug courier.
Referring to the case of Mary Jane Veloso, he reminded not to the innocence or guilt of people who should not be punished with execution, should lose his life.
"In fact, the guilty are not pickle-apain. Just look at the case of Serge Atlaoui, bookie alone or drug factory owner himself actually not executed right?"
Serge was arrested in Cikande, Tangerang, in 2005 and sentenced to life imprisonment by the Tangerang District Court and confirmed by the High Court. But on appeal, Supreme Court judge instead sentenced him to death while clemency had been rejected President Joko Widodo, last January.
Together with Mary Jane Veloso, Serge Atlaoui is one of the death row that the implementation of the execution was postponed.
However, delays in the execution of Mary Jane Veloso is not because he is still undergoing legal process but rather the emergence of new evidence. S eorang women in the Philippines surrendered and confessed to trap Mary Jane to be a drug courier.

Sadness tone newspapers in the Philippines ahead of schedule execution, with a photo of Mary Jean Veloso.
Mary Jane Veloso case proves many weaknesses in Indonesian law that the death penalty should not be applied. President Jokowi also need to review again rejecting the request for clemency that acted without checking carefully, analysts said.
Attorney General HM Prasetyo said that indeed "there turns out the facts and indications that Mary Jane Veloso is a victim of human trafficking".
"Yesterday, there were people who surrendered to Philippine police, claiming that he was actually recruited Mary Jane with a pretext to be employed in Malaysia, but suddenly transferred to Indonesia, landed in Yogyakarta," said Prasetyo told reporters.
Postponed, not canceled
However Prasetyo asserted, that the current status is a stay of execution, not a cancellation penalty. It is emphasized also by the President Jokowi itself in other occasions.
Executive Director of the NGO Imparsial, Poengky Indarti, said exposure Prasetyo "describes the bad law in Indonesia, which is no precautionary principle, there is no principle of fair trial".
"And Mary Jane's case shows clearly, habits most judges in Indonesia, also the prosecutor, who did not dig problems and facts. They prefer to base the court process on what is in the dossier (BAP) which is composed of police. They are not thorough , not careful in checking the BAP, "said Poengky.
null
Clergy Franz Magnis Suseno, in prayer in front of the palace, a few hours before the execution.
Terrible, added Poengky, the legal process that is far from the precautionary principle that also happens to cases that the threat of capital punishment.
Thus opening up the possibility of very large, that the defendant was sentenced to death, and eventually executed, but innocent or criminal acts are not severe enough to sentenced with the death penalty.
As happened to Mary Jane Veloso. As well as in the Zainal Abidin, Indonesian citizen who was executed last Wednesday morning along with seven others.
null
Explosion of excitement in the Philippines, after news emerged execution delays Mary Jane Veloso.
According Poengky, judges at various levels did not care about the fact that Zainal Abidin examination tortured in order to confess, but he only set up his own.
Mary Jane Veloso slightly more fortunate, because in the final moments of President Jokowi convinced of the facts outside the court ruling, especially after the recognition of those who entrap "poor women" with two kids it.
Explosion of excitement
In the Philippines, a stay of execution Mary Jane Veloso extraordinary greeted happily by hundreds of people who gathered in front of the Indonesian Embassy in Manila, and in various places around the country.
Ivanka Custodio in Quezon City tells the BBC, "The Filipinos are very pleased with this execution delays. We think of it as a kind of victory, because almost all convinced that Mary Jane Veloso is a victim of human trafficking, and it should be treated as such."
null
Police broke up a prayer with a group of women and migrant workers the State Palace
He went on, what happened to Mary Jane Veloso should make all parties in Indonesia to discuss again the various issues, both about the death penalty, combating drugs, rule of law and clean government system.
Similarly, Poengky Indarti remind so many people helpless and naive as Mary Jane Veloso that can be manipulated drug syndicate and other organized crime to the lure of money is not how, because of poverty.
null
Various circles in Jakarta pray for death row inmates and expect the cancellation of execution.
Being a big disaster if people like that become victims, executed on behalf of the firmness and the rule of law while the law can not touch big kingpin is usually protected by the authorities and officials and involve important people.
Poengky insists that is not negotiable is the death penalty, or at least to stop the practice, because it can always be misplaced.
Poengky also reminded, Joko Widodo President needs to change its approach in rejecting the petition for clemency.
null
Relief in Manila. Despite the execution of Mary Jean Veloso only been postponed, not canceled.
"Pardon the president's privilege to be performed very carefully and cautiously. Any decision to reject must be based on careful consideration, not by prejudice since the beginning," said Poengky.
However, he asserted, President Jokowi take the right steps by ordering a stay of execution of the Mary Jane.
This, said Poengky, could be a door for Jokowi president to take a different approach in making policies and decisions at a later date

BBC
Posted by needsjobslowongankerja at 5:04 AM