[Pepabri] Asked To Open A Document Linked The Abduction Case Of Prabowo's Dismissal Activists. This relates to the candidacy of the former President so 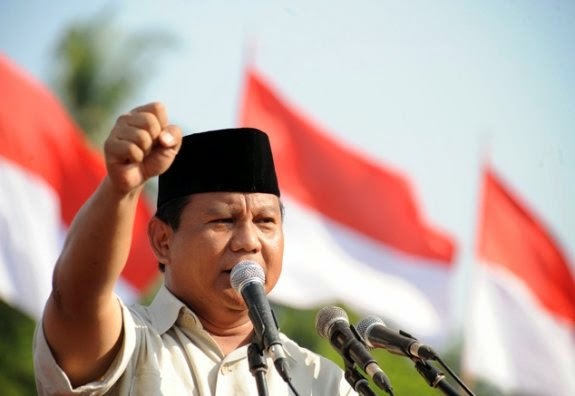 [Pepabri] Asked To Open A Document Linked The Abduction Case Of Prabowo's Dismissal Activists. This relates to the candidacy of the former President so


Union of Retired armed forces of the Republic of Indonesia ([Pepabri]) urged to reopen documents to the sacking of Lt. Gen. (Ret.) Prabowo Subianto of the unity of the military-related cases of abductions of activists.


The Coalition rejected the Forgotten Victims of human rights violations and urged the Union of Retired and Warakawuri of the armed forces of the Republic of Indonesia ([Pepabri]) an honorary officer in the Council document open (DKP) that contains about sacking the former Commander of the army's Strategic Command Lt. Gen. (Ret.) Prabowo Subianto of the unity of the military related cases 1998 specifically kidnapping activists.
Chairman of the Board Equivalent Institute Hendardi in Jakarta, Wednesday (27/5) says this may concern for Coalition urged that documents DKP reopened given the political reality that Prabowo Subianto ran as a presidential candidate.
According to Hendardi DKP Council recommends to do courts-martial to Prabowo, but until now has not been made. "We are concerned for urged that documents (DKP) is reopened, because it is essentially a political reality where Prabowo itself already running to be President. And we'll have a Supreme Commander of TNI's future to be held in the former if he is elected. How about a soldier with a dark past to be a commander in Chief. Is this not a problem?, "explained Hendardi.
Hendardi, adding a few things other than decisions DKP concerning Prabowo, the Coalition refused to Forget the victims of human rights violations and also ask to call the former head [Pepabri] staff of Kostrad Maj. Gen. Kivlan Zen (Ret.) tekait information the existence of fate of 13 activists who have yet to return the abductees.
"Reserved Kivlan Zen. We look forward to [Pepabri] at least we can discuss related details from Kivlan reserved 13 activists who have yet to return. It should ask its member related information [Pepabri] it. This is not merely a problem of abduction or forced disappearance, nor just a law enforcement issue, but also the rights of victims ' families to know that information, "added Hendrardi.
Coordinator of the Commission for missing persons and acts of violence (kontraS) Haris Azhar said the Coalition refused to Forget the victims of human rights violations and want to make an audience with General Chairman Agum Gumelar [Pepabri] as former members of the Board Honorary Officer (DKP) to ensure the decision was ever issued against the former DKP.
"Our goal was actually wanted to make sure to pack Agum (Gumelar Chairman [Pepabri]), as one of the former members of the Board Honorary officer. Associated with decisions made against Prabowo. This is related to the requirement to advance as a presidential candidate in the General Election Commission (ELECTION COMMISSION). We will also follow up the Police FORCE to ask for clarification related to the written decision in the decision letter of the Board of officers, "said haris Azhar.
Meanwhile, a representative of victims ' families Sumarsih abuses hope country soon mempertanggung with the cases of human rights violations of the past.
"We want a better future for Indonesia. And we also want to make cases of human rights violations could soon be resolved. Do not then there is word that the US seems far-fetched our voices five years. When in fact all the time we always want to fight for the country always immediately accountable for cases of human rights violations in particular who has investigated Komnas HAM, "said Sumarsih.
Earlier some of the activists of the HUMAN RIGHTS NGOS and victims of human rights violations who are members of the coalition against Forget planning had an audience with Chairman Agum Gumelar Monday [Pepabri] (26/5). However, the audience is void due to sudden Affairs Agum is rumored to exist.
From the search results, the decision of the Board of the VOA Honorary Officers on August 24, 1998, fire Lt. Gen. Prabowo from active service military Maj. Gen. Muchdi Purwopranjono and dismiss as commanding general of Kopassus.
Honorary Officers Council was formed on 3 August 1998 by the Commander of ABRI by General TNI Wiranto. The Honorary Council of Officers was formed to investigate the case of the abduction of activists and violent May 1998.
The Honorary Council of Officers led by ARMY Gen. Subagyo HS KSAD with members at that time were Kassospol the ARMED FORCES Lt. Gen. Susilo Bambang Yudhoyono and INDONESIAN Governor of the national resilience Institute Lt. Gen. Agum Gumelar TNI. Honorary Council investigation Officers at that time took place in closed. VOA
Posted by needsjobslowongankerja at 5:08 PM