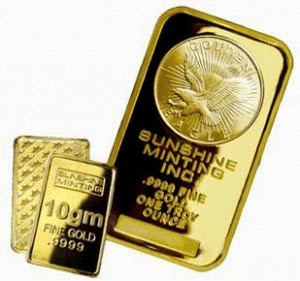 " Positive Expectations on Indonesian economic data to be published on this day was the catalyst for BEI index , such as inflation and trade balance , " said the Head of Research Valbury Asia Securities Alfiansyah Tuesday .

He argues that inflation is expected to remain under control in March 2014 in accordance with the projection of Bank Indonesia ( BI ) in the range of 0.1 percent . In addition , the Central Statistics Agency ( BPS ) estimates the trade surplus trend will begin to take place in February until the end of 2014 .

According to him , it will be able to continue to encourage the flow of foreign funds ( capital inflow ) into the domestic stock market .

" With these conditions , the BEI index still has the potential to move mixed with a strong tendency . On Tuesday , the BEI index may move in the range of 4747-4784 points .

Gold futures on the COMEX division of the New York Mercantile Exchange closed down for the fourth consecutive session on Monday (Tuesday morning GMT ) , as many economic reports are expected to create several volatile sessions throughout the week .

The most active gold contract for June delivery lost 10.5 dollars, or 0.81 percent, to settle at 1283.8 dollars per ounce . Tracking active contract , the price of gold was 2.9 percent lower for March , but rose 6.8 percent for the first quarter and so far this year , statistics show .

The price of gold on Monday was the lowest closing position for a most-active contract since Feb. 10 . According to some market analysts , as the U.S. economy improves and the Federal Reserve began to withdraw excess liquidity on the road to raise interest rates , precious metal prices will likely go down .

This week will end with the monthly U.S. jobs report , and other important reports to be released in the next few days , including initial jobless claims report . On a technical basis , the next support level for gold prices near U.S. $ 1,253 , some market analysts say .

In trading on the New York Mercantile Exchange , light sweet crude or West Texas Intermediate ( WTI ) for delivery in May fell nine cents to close at 101.58 dollars per barrel .

In London , Brent North Sea crude for delivery in May dipped 31 cents to stand at 107.76 dollars per barrel .

The absence of any progress over the weekend in clashes between Russia and the West over Ukraine to help take some of the pressure on prices , although the situation remains tense .

Russian troops were gathered in the eastern border of Ukraine , sparking concerns about Moscow plans after taking over the Crimean Peninsula this month .

Oil prices fell as the U.S. and Russia are trying to solve the Ukrainian crisis through diplomatic means .

Weekend talks between Russian Foreign Minister Sergei Lavrov and U.S. Secretary of State John Kerry did not reach any agreement . But the market took it as a sign that both sides seem to have been open to exchange views .

Although the two sides on Sunday ( 30/3 ) failed to reach a breakthrough deal in Paris , they agreed to continue talks after what was described as a negotiation " light " and " constructive " .

Russia provides about a quarter of Europe's natural gas supply , with about half of their exports shipped through pipelines in Ukraine , analysts said .

" The oil market is still locked into the balance of geopolitical risk and adequate supply , " said Phil Flynn of Price Futures Group .

" Talks with Russia that appear everywhere increases the likelihood that there will be sanctions lead to Russia . Still Russian troops are on the border of Ukraine . "

Traders also kept an eye on important traffic in the Strait of Hormuz , where an armed warship attacked an oil tanker on Sunday .

There is still room for the Fed to boost the U.S. economy through a policy of " extraordinary " in the form of bond-buying program and the massive interest rates near zero , Yellen said .

Speech to reassure investors after Yellen said in his first press conference as chairman of the Fed after the Fed policy meeting in March that the first increase in the federal funds rate can occur six months after the reduction of the stimulus ends , earlier than market expectations , so quoting AFP and Xinhua .

Posted by needsjobslowongankerja at 8:49 PM