Mega : Jokowi Not My Doll 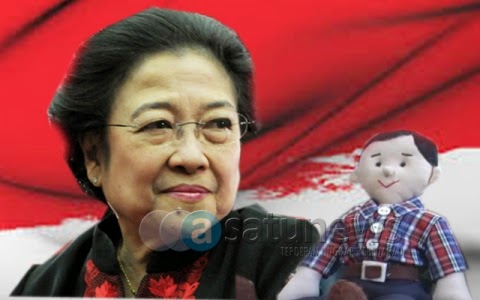 Mega : Jokowi Not My Doll


ASATUNEWS - Since officially been mandated as the presidential candidate of the Democratic Party of Struggle , attacks to Joko Widodo increasingly insistent . It was recognized Chairman Megawati PDI .

" Now many are trying to obstruct , " Mega said while campaigning in Field Koni Sario Manado , Manado , North Sulawesi , on Monday ( 31/3 ) .

Therefore , Mega urge people to win the PDI-P North Sulawesi on 9 April 2014 legislative elections . With a win or achieve a minimum of 20 percent , the PDI-P can carry its own candidate .

" I want to prove in North Sulawesi , I ask for help , if Mr. Jokowi want to be in the second round ( election ) , " said Mega PDIP campaign .

According to him , without a win in pileg or reach a minimum of 20 percent , it should seek a combination with another party or coalition . And if we do a combined rate , then Mr. Jokowi will not stand upright alone . Because the president must specify relates to an attitude of its own , "said Mega .

On that occasion , also dismissed the allegation Mega Jokowi a puppet candidate . " If he became president , presidential puppet ? Puppet Who ? " Mega said .

According to him , the party cadres which Jokowi is of course himself as the Chairman of the one who must decide who the candidate will be promoted as a candidate . " So I said Ir Joko Widodo . 's Not that he's my doll , " said Mega .

Mega reasoned choice fell to Jokowi Solo's former mayor is a person who has principles , beliefs and how the welfare of the people . " I'm the chairman of the party not carelessly choose someone as president who tridak people can prosper , " Megawati said .