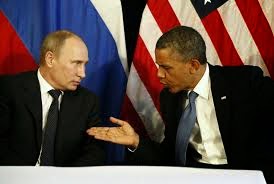 Russian President Vladimir Putin on Friday ( 28/3 ) , calling U.S. President Barack Obama to discuss the U.S. proposal for a diplomatic solution to the crisis in Ukraine , the White House said .

Obama suggests Russia give a real answer in writing and both leaders agreed to U.S. Secretary of State John Kerry and his Russian counterpart Sergei Lavrov will meet to discuss the next steps , the White House said in a statement about the telephone conversation .

Kerry Washington had proposed again to Lavrov earlier this week , when they met at The Hague in the high-level meeting in the Dutch city .

Obama urges Putin to support the constitutional reform and " avoid further provocations " , including the placement of troops on the border with Ukraine , Xinhua reported .

The U.S. leader also expressed continued U.S. support for the " diplomatic track " in close consultation with the Government Ukraian with the aim to ease the crisis .

Obama " is still possible to explain if only Russia withdrew its troops and did not take any action that could add to the violation of the sovereignty and integrity of the Territory of Ukraine , " the White House said .

He again expressed strong opposition to Washington's actions have been carried out by the Ukrainian for " violating the territorial integrity and sovereignty of Ukraine " .

On March 21 , Putin signed a law that officially made an agreement as part of the Crimean region of Russia , five days after the autonomous region in Ukraine with a majority vote in favor of incorporation with the Russians in a referendum .

The next action western Russia is a major concern , although Moscow said Russia had no desire to break up Ukraine . But Russia also spoke about the possibility of protecting Russian speakers in East Ukraian of attack .

Posted by needsjobslowongankerja at 10:24 PM