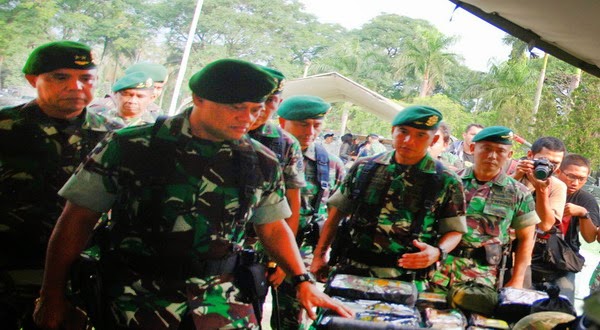 Inauguration was done at the State Palace, and was attended by Vice President Boediono and several ministers of United Indonesia Cabinet II.

"By Allah, I swear that I was to be appointed to this position either directly or indirectly, by any form or pretext not to give or agreed to give anything to anybody," said Billy, Friday (25/07/2014).

Billy went on, he promised not to accept a gift or a gift of anything from anyone.

"What I know or should be able to think that he had it in question, or perhaps concerned with the position or my job," he continued.

Former Pangkostard also pledged to remain loyal to the Constitution and maintain all the rules that apply to the Republic of Indonesia.

"That I will always uphold the oath of soldiers," he said.

Lt. Billy Nurmantyo office as Chief of Staff of the Army (Chief of Staff) Gen. Budiman replace the soon to retire.

President Susilo Bambang Yudhoyono (SBY) Former Pangkostrad instructing it to reorganize the army so much better in the future.

"Immediately consolidation, see, evaluate what needs to be addressed, immediately fix, so the Army became a pro in the future," said Billy at the State Palace on Friday (25/07/2014).

Billy continued, as a leader in the Army, he will continue the programs that had been running before. But there are some that should dievaluasinya.

"The first quarter we have already passed, so the program has been made ​​throughout the year, so I'm not going to change, but there are only continuing evaluation. Was a natural thing depending on the challenges ahead," he said.

Billy asserts, the Army while maintaining neutrality. He is also grateful to the presidential election runs smoothly.

"Army is very neutral and we tried to keep pro but firmly. And so far all running safety, it is not because of the military, but because it shows people we are civilized and intelligent people. And the world saw it all," he concluded.

Gen. Budiman not attend the inauguration of Lt. Billy Nurmantyo as Chief of Army Staff (Chief of Staff) at the State Palace.

A number of officials were reluctant to comment on the absence inauguration as Chief of Staff Lt. Gen. Gatot Budiman.Seperti replace TNI Commander General Moeldoko who declined to answer reporters' questions.

In addition, He was awarded three ministries did not know the reason Budiman who do not attend the inauguration of the Army Chief.

President Susilo Bambang Yudhoyono has appointed the Commander of the Army Strategic Reserve Command (Kostrad) Lt. Gen. Gatot Nurmatyo, in lieu of the Chief of Staff of the Army Gen. newly replaced Budiman.

He admitted, Billy's official designation based on Decree No. 36 / TNI / 2014 dated July 21, 2014 Position Termination and Appointment of Chief of Staff.

Fuad added that the handover process from the old Chief of Staff to the Chief of Staff will still be waiting for the new plan by the presidential inauguration Billy.

"We still do not know when the schedule will be inaugurated president. Maybe wait a conducive situation, because it is still in the presidential election and in the near future Lebaran, "he said.

TNI chief Gen. Moeldoko said turnover Army Chief of Staff (Chief of Staff) Gen. Budiman coincide with the announcement of the presidential election was a fluke. He also revealed the reason to replace Budiman.

The plan, Army Chief of Staff turnover will be done this week while awaiting Presidential Decree (Decree). Moeldoko admitted to not knowing exactly strong candidate for Chief of Staff, because the election is in the hands of the President.

"I can not precede Mr. President. Due to the President himself has not announced who will replace Army Chief candidate Gen. Budiman," he said.

Previously, Moeldoko submit three names of candidates to the President's Chief of Staff replacing Gen. Budiman who will retire in September 2014.

All three are the Commander of the Army Strategic Reserve Command (Kostrad) Lt. Gen. Gatot Nurmantyo, Vice Chief of Staff Lt. Gen. Munir M and the Secretary General of the Council of National Defense Lt. Gen. Waris. Okezone
Posted by needsjobslowongankerja at 1:58 AM