Education and Culture Minister Mohammad Nuh electric concept car named "city car" designed student Tenth of November Institute of Technology (ITS) Surabaya as "EC ITS" in conjunction with its launch in the Rectorate Building ITS Surabaya on Saturday. 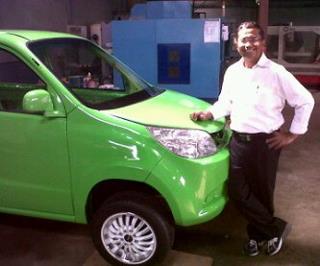 Education and Culture Minister Mohammad Nuh electric concept car named "city car" designed student Tenth of November Institute of Technology (ITS) Surabaya as "EC ITS" in conjunction with its launch in the Rectorate Building ITS Surabaya on Saturday.

"The word` EC `read` easy `which means easy.` EC 'also stands for' Electric Car '. Explanation, straightforward in this case as it makes the electric car is not difficult. Proven ITS students can show their best work, "said M. Noah.

He hoped that the name "EC ITS" to become a motivator for others and prove the results of other works. Former Rector of ITS lauded the metallic white car was fundamentally good and design.

"The plan, Indonesia will host several international events, one of APEC held in Bali. Never hurts cars on display and a remarkable work for the state guests. So that ITS could fly the flag," she said.

ITS Rector Prof Dr Ir Triyogi Yuwono DEA proud of the achievements of its students after making electric cars.

He supports a national electric car program (molina) as it echoed the central government.

"We support a national electric car. Insha Allah we have the ability helped it a success. We also want to prove that young engineers are given the opportunity to show his quality," he said.

Meanwhile, Mechanical Engineering Supervisor ITS Dr M Nur Yuniarto say, this is an electric car for the scale of research since 2011.

However, if the government intends to develop an industrial scale, it is ready to help advance research.

"Obviously, the majority of car components 'electric city car' made our students, unless the motor or batteries are purchased from abroad. However that will be used as an industrial scale, of course, we will design the battery in the country," he said.

He explained that the ITS students are capable of designing machine control system "iquteche" as used automobile gasoline, but the system can also be applied to electric cars.

"If the battery can also be made at home, the car components 'one hundred percent' electric city car was made in the country, so the regular price will be cheaper than the cost of the research that we need for this, namely Rp400 million to Rp500 million," he said.

In launching the electric car, witnessed the Palestinian Ambassador Fariz Mehdawi Navi. In addition to providing apresiasianya the electric car, he attended the Open Session of Palestinian origin Promotion of Doctoral student named Jabari Nedal AM in Courtroom Department of Electrical Engineering ITS Surabaya.

Posted by needsjobslowongankerja at 3:57 PM