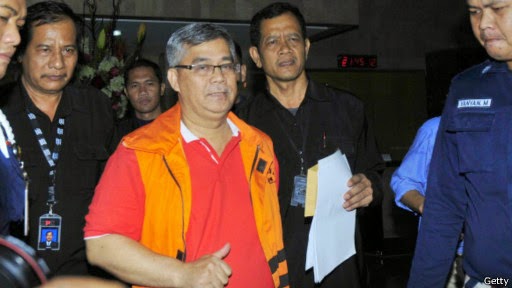 Former Chief Justice, Akil Mochtar was sentenced to life imprisonment by a panel of judges Corruption Court in Jakarta on Monday (30/06) night.

"To declare the defendant guilty, sentenced him to life imprisonment to the accused," said the Chief Justice in the Court Suwidya corruption, Jakarta, Monday (30/06) night.

Against this verdict, the former Chief Justice imply an appeal. "Up to heaven, I still appeal," says Akil, on the sidelines of the trial.

This ruling is not different demands prosecution of a lifetime, but the judges declared Akil not required to pay a fine of Rp10 billion.
The judges stated, Akil has been sentenced to the maximum, so that fines can be waived.


However, the sentence was not taken unanimously, as two members of the panel of judges, which Sofialdi and Alexander Marwata different attitude aka filed a dissenting opinion.

Akil previously subjected to six charges for allegedly accepting bribes related to disputed local elections in several areas, such as Lebak, Palembang, South Lampung, and the island of Morotai.

Akil Mochtar was arrested by the KPK for bribery allegations in early October 2013 and in his official residence, Widya Chandra Road, Jakarta.

KPK seize Singapore dollar and the U.S. worth about 3 billion at his residence.


Bersilaturakhim with our parents and siblings can extend the life and sustenance
Heaven is under the heel of your mother (your parents) air immediately Eid message to them immediately ticket On Line
The second blessing blessings God depends people we tus, soon to return home immediately buy air ticket Eid al-Fitr on line
Bersilaturahim (Eid) with the Father and Mother in the village to buy an airplane ticket Online
Sell ​​Tickets range of Entertainment, Aircraft, Railways, Hotel Rooms around the world, including in the city of Medina and Mecca for Haj / Umrah in Saudi Arabia
Need Tickets various Entertainmnet such as Universal Studios Singapore, Waterbom Jakarta, Kidzania, Solo Debut Bastian Steel, Trans Studio Bandung, Independence Party in 2014, Jungleland, Piraves the first, We the Festival in 2014, star trek the exhibion​​, and also need a ticket Aircraft, train (in Java, Indonesia), and hotel rooms around the world, as well as other concerts in various entertainment / amusement places in Indonesia) buyers airfares confirmation can be sent via email or short massage / SMS on the mobile phone (your mobile phone) show enough this confirmation from the mobile phone you at the airport. For booking hotel rooms around the world including hotel rooms in Madinah and the holy city of Mecca, Saudi Arabia for Muslims who want to go air-Umrah or Haj, including hotels in Bali, New York, Paris, London, Moscow, Jerusalem, Beijing, Shanghai, Bangkok, Kuala Lumpur, Singapore, Tokyo, and thousands of other hotels around the world, also in the oil city of Balikpapan, East Kalimantan (buy on line in ads on blogs: http://newsandfeaturesonindonesia.blogspot.com /

Posted by needsjobslowongankerja at 9:12 PM