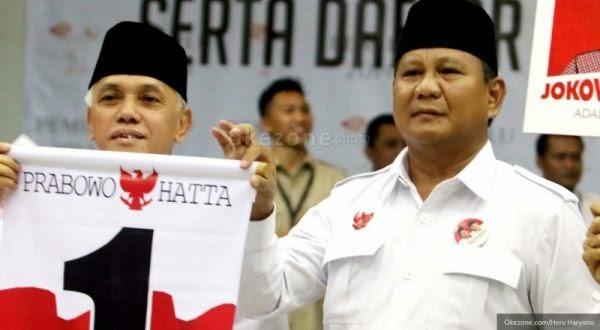 Based on the poll results of the National Survey Institute (LSN), when the presidential election held now, which is carried by a pair of red and white coalition would win.

Researchers LSN, said Pradipta Dipta, from a survey conducted, the respondents were asked where the selected pairs if the Presidential Election was held today or when the survey was conducted on 22 to 26 June 2014.

"As many as 46.6 percent of respondents chose Prabowo-Hatta. Which pick-JK Jokowi only 39.9 per cent," he said when describing the survey at Hotel Atlet Century Park, Senayan, Jakarta, Sunday (29/06/2014).

Dipta said, the survey shows that Prabowo-Hatta excel in the western part of Indonesia or areas with dense population. Meanwhile, Jokowi-JK voters in eastern Indonesia. However, from the results of the remaining respondents were undecided as much as 13.5 percent.

"Thus, to win the presidential election July 9, 2014, both Prabowo-Hatta and Joko Widodo-JK, should be able to win the hearts of voters undecided voters belonging which account for about 13.5 per cent," he explained.

LSN Executive Director, Omar S Bakri added, this result has an absolute meaning can still change. Then, with the remaining 13.5 per cent were still up for grabs both couples are now ahead in the Presidential Election.

"If Jokowi can take all (the sound) then the chances of winning," said Umar.

Vice versa, when Hatta Prabowo not able to capture the sound of floating it is then possible to lose too big. Respondents are not deciding this, Umar said, consisted of educated persons, information literacy, as well as their many choose to wait for all sessions completed debates.

The survey was conducted on June 22 to 26, 2014 and conducted in 34 provinces in Indonesia. The survey population is the entire population of Indonesia who already have the right to vote and are listed in the DPT. The number of respondents in 1070 were obtained through sampling techniques Rambang stages (multistage random sampling).

Meanwhile, the deviation error (margin of error) of 3.0 percent with a 95 percent confidence level. Own data collection was done by using interviews with respondents using the phone. This survey is also equipped with a media analysis and in-depth interviews with a number of speakers.


Indonesian people's interest to have a presidential candidate (candidates) military background was still very high. Evident from the results of a survey conducted by the National Survey Institute (LSN).

One conclusion states, more public requires a candidate who is associated strongly than perceived populist and simple.

Researchers National Survey Institute (LSN), Gema Nusantara, said of some of the questions posed to the respondents, whether to agree or not agree on a candidate combined military background and his running mate civilians.

"Nearly 80 percent said they agreed. Answered only 15.2 percent disagreed and the remaining 5 percent said do not know," he said while releasing the survey results of the LSN at Atlet Century, Senayan, Jakarta, Sunday (29/06/2014).

The survey was conducted on June 22 to 26, 2014 and conducted in 34 provinces in Indonesia. The survey population is the entire population of Indonesia who already have the right to vote and are listed in the DPT. The number of respondents in 1070 were obtained through sampling techniques Rambang stages (multistage random sampling).

Deviation of error (margin of error) of 3.0 percent with a 95 percent confidence level. Own data collection was done by using interviews with respondents using the phone. This survey is also equipped with a media analysis and in-depth interviews with a number of speakers.

Prabowo's campaign team-Hatta will more often see people in the month of Ramadan. Blusukan to the traditional market is perceived to be more effective in campaigning Prabowo-Hatta.

"The stage just in time for Ramadan baseball. Down to a more suitable market during Ramadan, the traditional market can continue to be side by side, "said the politician Gerindra, Nuroji in Market Depok Jaya, Jalan Nusantara, Jakarta, Sunday (29/06/2014).

"Prabowo has a strategy to develop the traditional markets. We also had no master plan, "DPP Treasurer lid Gerindra this.

By joining Rustriningsih, Fadli Prabowo-Hatta hopes to achieve maximum results in Central Java, which is a mass base PDIP.

"I also want Rustriningsih and provide support. His support in Java will add to our strength," he said.

Abdullah Gymnastiar does not deliver directly support Prabowo-Hatta. However, he said if ajarat Ponpes Darut Tawheed in line with the character development that echoed the pair number 1.

"So there Balem, good but weak. He is honest but less resilient, less bold and less disciplined," he said at the Istiqlal Mosque, Jakarta, Sunday (06/29/2014).

Then, there is the character jeku, ugly but strong. This character is owned by a corruptor. Later, he added, there is also a character jelem, ugly but weak. "Well this is a pity, that could be like a chicken thief late," he said.

Aa add, of some character, the most desirable is the default character, good and strong. The good that he's sincere, monotheism, clean, honest, reliable, free from hypocrisy, and tawadu, despite being given a high position remains humble.

"Brave strong character because we must have the courage. Both disciplines because there is no achievement without discipline. So tough plus sincere, honest, and tawadu," he said.

Meanwhile, Hatta said, the character development is to be fought from generation to generation.

"That Mr. Arif Rahman Hakim (education observers) say we should not leave the weak generation, but we got a tough character because we have a mission. As Muslims have a great mission to build rahmatan lil Alamin," said Hatta.

Thus, in any human being can still be useful. And that, according to Hatta can be done when people have a capacity of knowledge, remembrance, and abilities. Hatta statement was echoed Aa Gym.

"If you agree I pray that so istiqomah yes, 'said Aa Gym.  Okezone


Bersilaturakhim with our parents and siblings can extend the life and sustenance
Heaven is under the heel of your mother (your parents) air immediately Eid message to them immediately ticket On Line
The second blessing blessings God depends people we tus, soon to return home immediately buy air ticket Eid al-Fitr on line
Bersilaturahim (Eid) with the Father and Mother in the village to buy an airplane ticket Online
Sell ​​Tickets range of Entertainment, Aircraft, Railways, Hotel Rooms around the world, including in the city of Medina and Mecca for Haj / Umrah in Saudi Arabia
Need Tickets various Entertainmnet such as Universal Studios Singapore, Waterbom Jakarta, Kidzania, Solo Debut Bastian Steel, Trans Studio Bandung, Independence Party in 2014, Jungleland, Piraves the first, We the Festival in 2014, star trek the exhibion, and also need a ticket Aircraft, train (in Java, Indonesia), and hotel rooms around the world, as well as other concerts in various entertainment / amusement places in Indonesia) buyers airfares confirmation can be sent via email or short massage / SMS on the mobile phone (your mobile phone) show enough This confirmation from the mobile phone you at the airport. For booking hotel rooms around the world including hotel rooms in Madinah and the holy city of Mecca, Saudi Arabia for Muslims who want to go air-Umrah or Haj, including hotels in Bali, New York, Paris, London, Moscow, Jerusalem, Beijing, Shanghai, Bangkok, Kuala Lumpur, Singapore, Tokyo, and thousands of other hotels around the world, also in the oil city of Balikpapan, East Kalimantan (buy on line in ads on blogs: http://newsandfeaturesonindonesia.blogspot.com /

Posted by needsjobslowongankerja at 7:16 AM