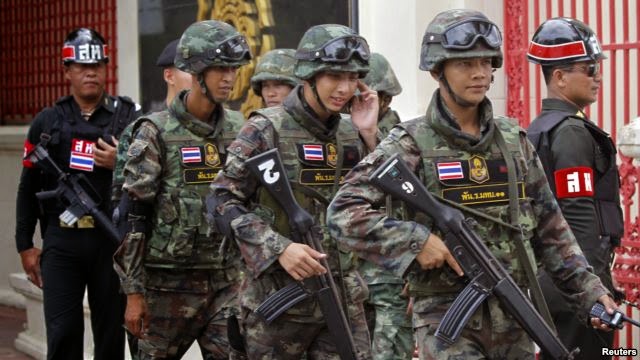 Army chief Prayuth said the bill will be submitted to the king for approval next month.


Commander of the military junta that led Thailand since the coup last month, said the draft interim constitution has been drafted, but no details were released.

General Prayuth Chan-Ocha said, the task of preparing interim constitution has been completed, and has been discussed in law.

Army chief Prayuth said the bill will be submitted to the king for approval next month. After that, he estimated it would take two more months before the Act was enacted while.

Prayuth, who is known as a staunch supporter of the kingdom, did not provide detailed information, regarding the interim constitution in a speech that was televised across the country on Friday, except ensure that the King of Thailand will remain the head of state.

Gen. Prayuth said, according to his estimates, the concept of constitution that would permanently ready tilled in 10 to 12 months.

After that, the military leader said, "free and fair elections" will be held. He estimates that parliamentary elections will take place in October 2015, and he urged people to be patient until the ongoing large-scale reforms, which he thought would take 300 days.

"Be patient," said the military commander. "We need time to reform".

Prayuth also announced that the new legislation will be drafted immediately important, and he invited the representatives of all ministries to participate in the conversation.

General Prayuth now holds all power in the executive and legislative branches after seizing power in Thailand 37 days ago in a bloodless coup which practically cancels most of the Constitution.

It was a coup or coup attempt successful 19th government since the end of absolute monarchy in 1932 below.

Since the coup, General Prayuth has issued dozens of decrees or decrees on matters big and small, from the provision of funds for the millions of farmers are heavily indebted because of the rice subsidy system failure committed by the previous government, in order to free broadcasting a football game trophies world.

The military junta, known as the National Council for Peace and Order or abbreviated NCPO, also has called hundreds of scholars, activists, politicians, and journalists for questioning. Banned political activities and news media companies work under tight military surveillance.

General Prayuth speech Friday evening has become a fixed event since the coup d'etat of May 22. This week he defended the continuing effort law martial law, imposed three days before the coup, saying that "there is little restriction of freedom".

He also warned the media not to report contain information that is not verified on the junta.

He said this after denying charges that he had conspired to overthrow the elected government in consultation with the former deputy prime minister who led anti-government protests this month.

The U.S. government has blocked U.S. security aid to Thailand's $ 4.7 million, or nearly half of annual aid of $ 10.5 million to the longtime ally.

United States on Tuesday (24/6) said it has stopped more aid to Thailand in response to a military coup, and the United States are considering moving to a large regional practice outside of the kingdom of Thailand.

The government in Washington has blocked U.S. security aid to Thailand's $ 4.7 million, or nearly half of annual aid of $ 10.5 million for a longtime ally, according to State Department official Scot Marciel in testimony to Congress.

United States quickly condemned the Thai military after not heed the warning to not intervene in political turmoil. The State Department announced it had frozen funding $ 3.5 million in just one day after the coup of May 22.

Additional funding was discontinued, including for weapons training programs for police-sponsored study trip to Thailand and the United States for senior police officials from Thailand, according to another U.S. official.

Marciel said the U.S. also is considering moving to the next year Cobra Gold, one of the largest U.S. military exercises and a key element in the U.S. strategy to shift the power to Asia.

The U.S. and Thailand have been doing the exercises together since 1980, and this year involved about 1,300 participants from countries all over the U.S. are familiar with the area.

If Thailand does not immediately restore independence and permit the holding of elections, "there will be more people of Thailand who will look for opportunities to express his displeasure," Marciel said.

Strict action against Thailand is very different from the U.S. approach to Egypt.

Thais formation Liberation Organization for Human Rights and Democracy announced on Tuesday (24/6) in an open letter by Charupong Reuangsuwan.

The first sign of organized opposition against a military coup Thailand has emerged, with a former government minister is determined to work with fellow dissidents to restore "democratic principles."

Charupong Reuangsuwan is chairman of the Pheu Thai party of Prime Minister Yingluck Shinawatra, who was ousted by the Constitutional Court before the military coup in May.

He said that the new campaign will help organize the resistance, both inside and outside the country, the military, which he said was not democratic and try to preserve its role in politics.

Acting foreign minister, Sihasak Phuangketkeow, rejecting the announcement, saying "there is only one legitimate government" in Thailand.

It is not clear where it will be based organization or how they would oppose the military regime, which has cracked down on any sign of protest against the government takeover. VOA


Bersilaturakhim with our parents and siblings can extend the life and sustenance
Heaven is under the heel of your mother (your parents) air immediately Eid message to them immediately ticket On Line
The second blessing blessings God depends people we tus, soon to return home immediately buy air ticket Eid al-Fitr on line
Bersilaturahim (Eid) with the Father and Mother in the village to buy an airplane ticket Online
Sell ​​Tickets range of Entertainment, Aircraft, Railways, Hotel Rooms around the world, including in the city of Medina and Mecca for Haj / Umrah in Saudi Arabia
Need Tickets various Entertainmnet such as Universal Studios Singapore, Waterbom Jakarta, Kidzania, Solo Debut Bastian Steel, Trans Studio Bandung, Independence Party in 2014, Jungleland, Piraves the first, We the Festival in 2014, star trek the exhibion​​, and also need a ticket Aircraft, train (in Java, Indonesia), and hotel rooms around the world, as well as other concerts in various entertainment / amusement places in Indonesia) buyers airfares confirmation can be sent via email or short massage / SMS on the mobile phone (your mobile phone) show enough this confirmation from the mobile phone you at the airport. For booking hotel rooms around the world including hotel rooms in Madinah and the holy city of Mecca, Saudi Arabia for Muslims who want to go air-Umrah or Haj, including hotels in Bali, New York, Paris, London, Moscow, Jerusalem, Beijing, Shanghai, Bangkok, Kuala Lumpur, Singapore, Tokyo, and thousands of other hotels around the world, also in the oil city of Balikpapan, East Kalimantan (buy on line in ads on blogs: http://newsandfeaturesonindonesia.blogspot.com /
Posted by needsjobslowongankerja at 2:51 AM