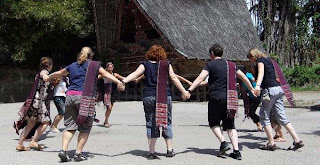 "The party will take place from 28 to 31 December 2012 is a folk festival that is expected to support and encourage the tourism industry to increase tourist visits to the region of Lake Toba," said Billy in Parapat Friday.

According to him, the increase in the flow of foreign tourists and the archipelago should be driven by the development of tourism, through the organization of Lake Toba Festival (PDT), which has been used as a permanent agenda at the national level.

He said the potential of the lake is located in the central part of North Sumatra province was a national strategic area, especially with the location proposed as Geopark (the garden of the earth) which will run a mainstay attraction.

Through the theme of `Indonesia` culture festival, he said, the benefits of special interest tourism destination with a wealth of natural potentials blend cultures in the largest volcanic lake in Southeast Asia should be able to serve as a national tourism icon, as well as a special economic zone of tourism.

Because, the storefront of Lake Toba, very decent serve as a tourist attraction that is very interesting, considering the beautiful natural scenery comes a wealth of unique cultural customs and specific.

Admittedly, the delay in the implementation of PDT 2013, related to the allocation of the budget, so the new realized Amended Budget (P-ABD) of North Sumatra province, 2012.

However, for the implementation of the PDT 2012, Billy gave the message that can be used as a medium and means in an effort to raise revenue from the North Sumatra tourism sector through the promotion of economic growth of the people in the tourist area of ​​Lake Toba.

Posted by needsjobslowongankerja at 10:50 PM