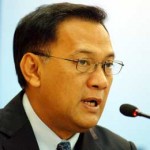 
Remaining budget financing (Silpa) in the late 2012 is expected to reach approximately Rp26 trillion or lower than 2011, which reached Rp39, 2 trillion, according to the Minister of Finance (Minister) Agus Martowardojo.

"Silpa not great. Probably in the range of Rp26 trillion," he said in Jakarta on Thursday.

He said, Silpa in 2012 decreased compared to 2011 due to the amount of expenditure on energy subsidies have exceeded the specified threshold and tax revenue estimates do not match.

"It has decreased compared to last year," he said.

Meanwhile, the Ministry of Finance (MoF) notes, the accumulation of unused portion will be more budget balance (SAL), which can be used to finance infrastructure or other urgent needs.

The Government has at the end of 2011 SAL worth Rp96, 6 trillion with an estimated usable worth Rp81, 3 trillion for early needs Rp35 trillion bond stabilization framework Rp16, 3 trillion and Rp30 trillion net SAL.

Of SAL funds worth Rp30 trillion, the government uses Rp6, 0 billion for the education budget and worth Rp24 trillion for infrastructure, and the urgent need for food, energy and the anticipation of natural disasters.

Posted by needsjobslowongankerja at 9:21 PM