When on duty, one foot stepping on the court policeman and one potentially other foot in the grave. 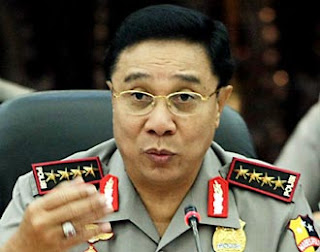 When on duty, one foot stepping on the court policeman and one potentially other foot in the grave.

Based on data from Indonesia Police Watch (IPW), as many as 49 people being wrongfully shot by police during 2012. Of these 49 people, 17 people were killed and 32 others wounded.

In response, National Police Chief Gen. Timur Pradopo said police often faced with a threatening situation on the ground. Police often deal directly with criminals and society. At that moment, the police faced a dilemma situation. When on duty, one foot stepping on the court policeman and one potentially other foot in the grave.

"It's the police's performance of its duties, especially faced with the threat. Police have two legs, one on the court, one in the cemetery. If late, we go to the cemetery. Lives we were lost. If it's too fast, he had responsibilities related to the action, "East said in a report late Rupatama Police at Police Headquarters Building, Jakarta, Friday (12/28/2012).

However, in the East, all the policemen who allegedly shot one definitely dealt with firmly. In this case, one foot before police took her to court. Their actions will be proven in court. Meanwhile, if slow-moving, life was at stake for it Bhayangkara Corps officers.

In 2012, a total of 15 policemen were killed, were killed in the attack, Solo and Poso terrorist and shooting an armed group in Papua. According to the East, what the police had been an attempt to protect communities from disturbances that occur. If found guilty, the police prepared their actions.

"But, believe me people. If it was a member in any circumstances, if any lives were lost, they must be checked, going right, going wrong," he said.

East explained, the Police received external oversight. One is the National Police Commission. East said that in 2012 will be used to evaluate candidates for the police. In 2013, officers in brown uniforms will continue to improve services to the public.

Posted by needsjobslowongankerja at 8:05 PM