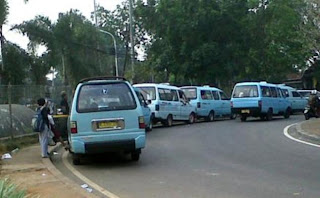 The death toll is unknown named Haerudin (42). The three people who were injured named Rifki Firmansyah (17), M Abduloh Azam (16), and Muhammad Marfaiz Nurajri (17). All three victims were taken to the Hospital of the Indonesian Christian University (UKI), Cawang, East Jakarta.

Rifki said, the incident occurred when he and three colleagues were going to celebrate the new year in Yoyakarta via public transit train at Senen Station. However, they go beyond the train schedule so that all three are planning to stay at home Azam in Depok, West Java.

"On the way, there are two singers up. One at the door, one on the inside. Firstly usual singing, long dagger ngeluarin Nodong us," he said when met Kompas.com Rifki in Hospital Emergency room UKI, early Saturday days.

"Keep it grandfathers I Stand, on the spot, the three of us just jump out of public transportation," said Rifki.

The three teens are not aware of any subsequent events that befall another old man in the public transportation. The three who had blisters all over his hands and body helped traffic police who happened to be passing by and was taken to hospital for treatment CIU.

According Rifki, when the incident took place, in public transport, there are eight people, ie one driver, one female passenger in the front, one elderly man, he and his two colleagues, as well as two unknown actors as young teens.

Naas, Haerudin apparently dead. The poor old man's body was found in a state of blunt impact injuries to the head Jalan DI Panjaitan, precisely near Gembrong Market, East Jakarta. His body was taken to the room remains UKI Hospital waiting for a family.

Now, the injured still in intensive care at the Hospital ER CIU. While the bodies of the dead are still buried in the same hospital. The family of the wounded and dead are known to have come to the hospital. As the public transport drivers have been secured in the police station Jatinegara.

Posted by needsjobslowongankerja at 12:07 PM