Supreme Court decision that set a fine of Rp 2.5 trillion over the Asian Agri Group is a groundbreaking law 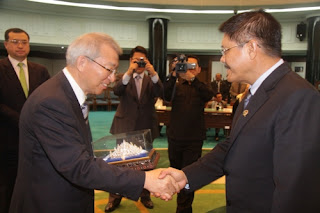 Supreme Court decision that set a fine of Rp 2.5 trillion over the Asian Agri Group is a groundbreaking law

Supreme Court decision that set a fine of Rp 2.5 trillion over the Asian Agri Group is a groundbreaking law in order to impose sanctions against tax evasion a criminal offense. It was also an effort to protect the state income tax from the sector, as well as a precedent for similar cases next.

Chairman of the panel of judges in the Supreme Court case (MA), Djoko Sarwoko, deliver it, in Jakarta, Saturday (29/12). MA had decided to punish the Asian Agri Group (AAG) with a fine of Rp 2.5 trillion in the case of the accused are former Asian Agri Tax Manager shredded Sea. The verdict was read in court December 18, 2012 with the judge Djoko Sarwoko (chairman), as well as members Komariah Emong Sapardjaja and Sri Muharyuni.

Shredded Marine sentenced to two years in prison with three years probation for being filled Letters Annual Tax (SPT), which does not fit the truth. According to Djoko Sarwoko, shredded it acts for and on behalf of corporate interests AAG that corporations must share responsibility.

"The act continued for four years so it should be seen as a deliberate and is a crime in tax. This makes the state lose the right to earn income from the tax sector, "he said.

In accordance with Article 38 and Paragraph 39 (1) Clause c of Law No. 16 Year 2000 on Taxation, the judge may impose a fine of 200 percent of the value of tax payable. Based on the calculation of the tax, the total tax rate for allegedly embezzled by 14 subsidiary of AAG during 2002 to 2005 amounting to Rp 1.25 trillion. Once multiplied by two, the number of fines to Rp 2.5 trillion, and must be paid no later than a year. "MA for the first time to make a decision like this tax case. This could be a precedent for similar cases in the future, "said Djoko, who will retire by January 1, 2013.

Separately, the attorney shreded Sea, Mohamad Assegaf, said he was surprised by the decision of the Supreme Court that he made inaccurate values. The case was never heard Central Jakarta District Court and the Jakarta High Court, and the case is declared prematurely. Because, AAG ever written request to the determination of the amount of tax liability DG Taxation and Finance Minister, but never met.

Assegaf said the case should be tried as a tax dispute in the tax court, not as a common criminal in court. Criminal justice tax is a last ditch effort if the tax collection processes stuck.

Assegaf highlights Djoko status approaching retirement. "It's hard for me to not expect Djoko Sarwoko make hasty decisions and probably to make the image of a sweet farewell," he said.

However, Chairman of the Education Association of Indonesian Advocates (Ikadin) Maqdir Ismail judge, the Supreme Court decision is a breakthrough that should be appreciated. Any company that proved to be incorrect reporting or tax fraud should be punished severely

Posted by needsjobslowongankerja at 10:25 PM