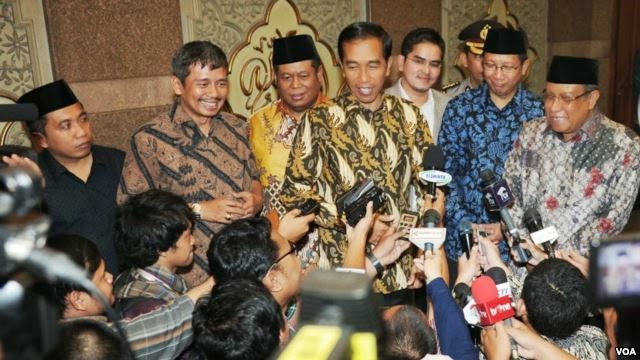 President Jokowi said the Government needs to get the views of the NU andMuhamaddiyah to strengthen the implementation of the death penalty for drug dealers and the perpetrators of terrorism.

Come to the Office of the Superintendent of the Nahdlatul Ulama (OUTGOING) and the Office of the Board of the Centre (PP) Muhammadiyah, President of Joko Widodohad the support of the two biggest Muslim organizations in Indonesia to impose the death penalty for drug dealers and terrorist suspects.

President Jokowi said the Government needs to get the views of the NU andMuhamaddiyah to strengthen the implementation of the death penalty for drug dealers and the perpetrators of terrorism.

"We convey with regard to the death penalty. Especially for drug dealers. We ask his view. Then with regard to terrorism, radicalism and extremism. Roughly that we beghis views, "said OUTGOING President in Office, Thursday (24/12).

OUTGOING CHAIRMAN Said Aqeel Siraj ensure its Board approved the execution of the death penalty for drug dealers.

"Nahdlatul Ulama supported the death penalty against drug dealers. But not for usersYes, because she is a victim, "he said, adding that NU is also anti radicalism,extremism, let alone against a group of militants of the Islamic State (ISIS).

"Muhammadiyah fully support the death penalty against drug crimes. The reasoning a lot, especially about the generations to come, "he said.

"If we create a scale percentage Yes already in 70-80% of his preparation. Because in addition to the already discussed at ministerial level, then the Attorney General had also been coordination with the Assistant, the team have prepared a executor ofkejagung Attorney executor in regions where the execution will take place, "he said.

From the Attorney General's Office, there were 64 cases of death row inmates.However, for a while there are five new convict is already fixed so magnitude of lawcould be executed prosecution. (VOA)

Posted by needsjobslowongankerja at 12:22 PM