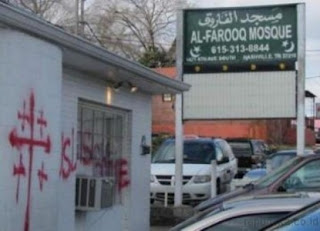 Americans angry because the Muslim community of New York NYPD police branded the entire mosque and Islamic Center as a " terrorist organization " . Muslims feel betrayed by the police after they formed a partnership with the police to increase confidence in the community .

" When we invite Commissioner Ray Kelly and police officials to come to our mosque , to our institution , he instead came through the back door , " said Linda Sarsour of the Association of Arab - American organization in New York.

After years of working with the NYPD , Sarsour feel angry because NYPD police trying to infiltrate into the body of the association , at the time they work together .

Muslim anger comes after rumors that the NYPD's mosque branded as a terrorist organization . Labeling that allows the police to spy on worshipers and the imam of the mosque , using informants and recording lectures speech silently without any evidence of criminal acts committed mosque imam or congregation . This is the tactics that police use tactics just NYPD and
Such was never used by the FBI .

AP source of news agency said , the NYPD has been opened at least a dozen terrorism investigations company ( theist ) as part of an initiative to help the police infiltrate and investigate terrorist cells in secret since the bloody 2001 attack . " We are tired of the violation of civil rights of Muslims in New York , " said Sarsour .

Growing Muslim anger against New York police after the mass media in 2011 and mentioned that the NYPD uses undercover agents to spy on the Muslim community . Police thugs to infiltrate the public to record daily life and monitor mosques and Muslim student organizations .

Chairman of the Arab American Association of New York , Dr. Ahmad Jaber felt had betrayed after he and his friends are working hard to establish a relationship between the NYPD and the Muslim community . Jaber is the Chairman of the Dawood Mosque in Brooklyn , which is the oldest mosque .

Charges against the NYPD was not the first . In September, the CIA launched an investigation in cooperation with the NYPD for spying on American Muslims .

A number of mosques in the United States have been attacked following a wave of anti - American protests over the filming of the Prophet Muhammad in the Muslim world .

" This thing has never happened before , even after the tragedy of Sept. 11, 2001 bloody , " said Ehsan Ahmed , director of the Islamic Center of Harrisonburg mosque in Virgnia and also James Madison University economics professor .

Fairfax police spokesman called the incident area as ' random acts of vandalism ' and will spread to other areas . He claimed that the attack was not just happening in the mosque .

Muslim leaders, however, saw the attack with a variety of anti - American protests that swept across Muslim countries in connection with a production of American films of the Prophet Muhammad SAW .

The protests sweeping across the Islamic state since last Tuesday, September 11 , to coincide with the commemoration of the bloody attacks in the U.S. , the US -made movie that insults the prophet .

With the title " Innocence of Muslims " , the film describes the Prophet Muhammad as a fool , seducer of women and religious counterfeiters .

The film was promoted by American pastor , Terry Jones , who in 2010 angered Muslims for planning to burn the Koran . Jones said the film was considered kind of satire about the life of the prophet Muhammad . He released a video on YouTube after claiming to have a ' trial ' symbolic of the prophet .

U.S. Secretary of State Hillary Clinton called the film disgusting and said that the U.S. government had nothing to do with the movie . Muslims in America have the support of public sympathy following a number of incidents of attacks on mosques .

By Kai Degner , legislators and also real estate agents , this incident provides an opportunity for residents to get to know their neighbors and build a positive image . He founded the site titled " We are all Harrisonburg " and inviting residents to attend solidarity meeting in the mosque that will be attended by about 500 people . Residents in the area of ​​Dar al - Hijrah also feel shocked over attack on Masid .

American Muslim leaders also condemned the attacks on American diplomatic missions in several countries . They call for Muslims to tell the world about American society and asserted that the expression of anger should not be channeled by means of violence and killing of innocent people .

Council of American Islamic Relations, CAIR , based in Washington also released a videotape in Arabic and asked Muslims not to blame the American government over the circulation of offensive film .

American Muslim group Council of American Muslim CAIR called on all Muslims in the world to ignore a movie that insults the Prophet Muhammad that triggered the attacks on U.S. embassy that killed the U.S. ambassador to Libya J Christopher Stevens after embassy attack .

The film produced and directed by real - estate developer American - Israeli , describes the Prophet Muhammad as a fool , a charmer and a forger of religion .

Movie titled " Innocence of Muslims " takes place in the modern era to describe an Egyptian Coptic Christian fleeing from an angry Muslim mob . The police only saw it while the masses in a clinic where a Christian doctor worked .

Then , the doctor was talking to her daughter about what makes an Islamic terrorist . After that , the clip was changed to a variety of historical events from the time of Prophet Muhammad SAW , mostly takes place against the backdrop of the desert.

This movie has been circulating on the internet for a few weeks before the protests broke out . depicted the prophet Muhammad as a seducer of women , homosexuals and child abusers .

U.S. media said that the film was produced an Israeli -American property developer . Various sources on the internet says that the author is Sam Bacile , a name of Egyptian descent .

The film was posted on YouTube in June , but only captivate the attention of the world last week when an Egyptian -American Copts make a caravan in the Arabic-language blog post and e-mail newsletters that publish the movie .

The film was promoted by U.S. pastor Terry Jones , who had angered Muslims in 2010 with plans to burn the Koran .