Military Egypt continue to beat up severely own people 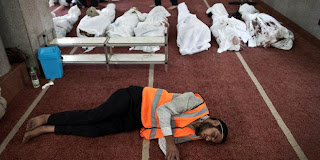 Military Egypt continue to beat up severely own people

Hundreds of people who were joined in South East Asia Humanitarian Committee) staging a protest (SEAHUM in front of the UN building in Jakarta, as solidarity concern for "massacre" in Egypt. People also Egypt's Muslim Brotherhood reminded that there have been many honorable for Indonesia.

Indonesian independence day by confession "de facto by Egypt in March 22, 1946 at the urging of Egyptians called Muslim Brotherhood," the President Aksi Cepat Tanggap (ACT) Ahyudin, Friday (8/16/2013).  On the other hand, he added, case of Egypt should be seen as a peaceful demonstration civil society that responded to by the government while Egypt's security forces military.

"The different levels of society down to voice their aspiration, protesting against a takeover result shift democracy by military force. There is no weapons, no violence in this protest. Children and women, younger siblings, did not escape from the objective violence (the security forces Egypt)," explained Ahyudin.

In addition, added Ahyudin, in Egypt have an important role in education, including for Indonesia. There were No less than 5,000 students Indonesia now is still studying in Egypt, especially in Al-Azhar. For years, he said, the intellectual Indonesia there are many who receive an education from Egypt.

Egypt's political crisis, added Ahyudin, also has the potential made intellectuals who were involved in the peace to the Egyptian President Muhammad Mursi became a victim.

"Bloody Wednesday" in Egypt started from efforts to force them by security forces Egypt drive demonstrators supporting our rolled away from Egypt Muhammad Mursi on Wednesday (8/14/2013).  Gen. these evictions resulting in the fall victim mass destruction.

Data's Health Ministry said that, at least 638 people were killed there were no less than 4,000 people were wounded. Muslim Brotherhood, Meanwhile, said, the number of dead bodies is expected to reach 2,600 people. The injured victims have reached 10,000 people.

This time, there is a plan Muslim Brotherhood dismissal (IM) in Egypt. According to news AP on Saturday (8/17/2013), Prime Minister Interim (temporary) Hazem al-Beblawi has been officially submit a proposal to dismiss IM. "A proposal, is currently being studied," said the spokesperson cabinet.

IM which was established by Hassan al-Bana, Cameroon in 1928, according to the Revolution 2011 is the group that legal. Until now, IM have around 600,000 members. IM in Egypt is regarded as having organizational system. IM also expanded and spread to various countries, a predominantly Muslim.

It is different from

Even though it has been standing at the end of the above, in Egypt, IM launched new political party in April 2011. The Party is called the Party of Justice and freedom. The IM had said that if political parties that have a mission and purpose. "But, how different," said the statement IM.

In June 24, 2012, after falling the regime President Hosni Mubarak, the General Election Commission Egypt announced, in a press conference in National television Egypt, the presidential candidate from the Justice and freedom, Muhammad Mursi, to be the number one person in the land of the Pyramid.

Then, elected Mursi as a momentum is important to Egypt. The matter, Mursi is our first ever civilian Egypt. During this, even when the monarchy Egypt collapsed in 1952, all Egyptian president from Gamal Abdel-Nasser to President Hosni Mubarak comes from the military.

Pelengseran presidency from Mursi force in July 4, 2013 made by officers IM also affected by new law. Highest leader IM Mohammed Badie, for example, was arrested by police Egypt. He would undergo the court session in August 25, 2013 on the charges puppeteer anarchic demonstration culminated into a bloody in Egypt.

In Egypt, Mohamed Zawahri is a leader Salafi Jihad group. This group is one of the supporting President, Muhammad Mursi.

Meanwhile, according to government's official website warta Al-Ahram, when he was arrested, Zawahri among brought a laptop possession. Since Mursi be reshuffled in July 4, 2013, Jihad Salafist mobilize its followers to flood roads in Cairo, in particular, to oppose what they call the "coup d'etat".
Posted by needsjobslowongankerja at 10:37 AM