.70 People were killed in clashes in Nigeria 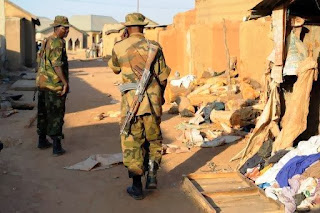 .70 People were killed in clashes in Nigeria


Defence Institute of Nigeria , Monday ( 23/12 ) , said more than 70 people have been killed in clashes between the military and Boko Haram members in the northeastern part of the country, after the attack on Friday ( 20/12 ) , against a military barracks in Bama .

" More than 50 of them ( Boko Haram members ) were killed in a shootout with soldiers in a military operation carried out in order to subdue the fleeing terrorists , " said Maj. Gen. Chris Olukolade , Director of Information at the Ministry of Defence of Nigeria , in a statement .

According Olukolade , a military operation that resulted in the destruction of more than 20 vehicles carrying militants who fled .

He added that the vehicle was used during the attack on a military barracks and look through aerial surveillance , Xinhua reported .

At that time , Boko Haram militants were trying to cross the border back into their hiding places in Cameroon .

On Friday , the military stated on Bama military barracks was attacked by rebels who came from the network which is across the border from Nigeria to Cameroon through the Small Town bangki . He added , large caliber weapons like anti- aircraft guns and rocket-propelled weapon used in the attack , which lasted for hours .

Bama Small town , about 65 kilometers from Maiduguri , Borno State capital , has faced a number of members of Boko Haram attacks , so make the most of its citizens to save themselves .

Many people were killed in May , when suspected militants attacked a Small Town Bama , and killed many victims - mostly children and women . , Xinhua said .
Posted by needsjobslowongankerja at 11:02 PM