Entrepreneurs press the government on the export of minerals 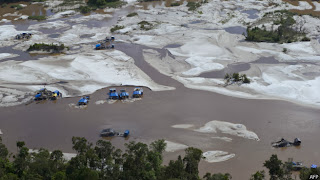 . Entrepreneurs press the government on the export of minerals

Mine operators continue to apply pressure on the government and the Parliament related allowances rules that prohibit the export of raw minerals as stipulated in the Mining Law .
The ban will take effect on January 12th 2014 and is claimed to be ' deadly ' small and medium mining enterprises are generally owned by local businessman ..

Mining Law which was passed in 2009 mandates businessmen mineral processing sites in order to build the mine so as to export mining results in the form of minerals that have been processed up to 99 % .

Business actors assess this rule too heavily borne by the holder of the local industry Mining Permit ( IUP ) .
" To this clear IUP weight because right mean just starting the business in the last 7-8 years , " said Poltak Sitanggang , Chairman of the Indonesian Employers Association Minerals ( APEMINDO ) .

In contrast according to the rules should be reinforced APEMINDO applied to corporate holders of the Contract of Work ( CoW ) , which has been operating for decades in Indonesia .
" Imagine it's 40 years old , then there is no reason that they say not enough time to prepare for the smelter ( the factory where mineral refining process ) , " he added .
The average credit card holders are foreign companies and owners of mineral concessions relatively large in Indonesia .

Applicability of this prohibition , according to claim entrepreneurs , will cost the country billions of dollars and widening trade deficit that will hit the rupiah was weak .

' Do not mushy '
Mining Law states in the five years since passed , banning the export of raw mineral rules should apply so that Indonesia's natural resources not been sold at a low price because it is not processed first .

" These entrepreneurs have long squeeze our natural resources , the people can not be anything . 's Not fair . 's Why we wants hard about this Mining . "

Totok Daryanto
The reluctance of employers meet these rules by members of the House of Representatives Commission VII overseeing energy and mining , Totok Daryanto , suggests that employers consider the rules easily deflected .
"There is a belief that the ban could be arranged was , the pressure can be . Then the government should not mushy " said Totok upset .

The efforts of government officials , including Minister of Energy and Mineral Resources Coordinating Minister Hatta Rajasa , who asked parliament approved the looseness or relaxation of the ban was rejected Commission VII .
In the last official meeting in early December , the government requested that the Commission VII consistently execute these rules and enforce the prohibition as applicable .

" Employers should want to understand because we do not want the natural resources depleted sold at a low price . What are the benefits for our people ? " Totok exciting .

" These entrepreneurs have long squeeze our natural resources , the people can not be anything . 's Not fair . 's Why we wants hard about this Mining . "

At least a dozen companies have already said it will begin the process of construction of the smelter began this year to three years into the future , but if the ban remains in effect tap the export of raw minerals will drastically reduce their production .

A number of multinational mining companies submit to the government they are willing to build a smelter in Indonesia , provided these rules are strictly enforced .
According to the trade balance during January to October last , still occupy a niche mining large foreign exchange earnings from exports .

However, these results largely derived from the sale of coal , natural gas , and crude oil . As for other minerals such as nickel , copper , and bauxite ekspornyanya estimated value of around U.S. $ 500 million in a month .
Posted by needsjobslowongankerja at 7:17 PM