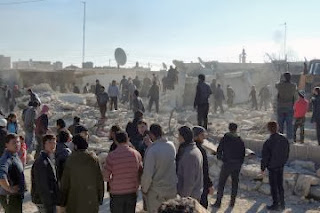 During the eight days of air strikes launched fighter jets in the Syrian city of Aleppo has killed more than 300 people , including 87 children , monitoring groups said Monday .

" Since December 15 to 22 , 301 people have been killed , including 87 children , 30 women , and 30 members of the rebel , " Human Rights Watch said Syrian , who got the information from a number of witnesses and the activist network in the country in civil war the .

Syrian President , Bashar Al Assad , accused of bombarding a base of resistance against the regime in northern Syria to bring down the morale of the rebels and the government turned supports .

A security official told AFP on Monday that the Syrian army is adapting tactics because they are running out of ground forces .

He said that the number of civilians who fell because of the rebels hiding in a residential area .

Aleppo residents support has been split in two since the uprising against Assad 's regime began in the summer of 2012.

Human Rights Watch alleges that the government troops using weapons and tactics that can not distinguish between civilians and rebels , so the attacks launched tends to " blindly " .

On Sunday , the National Coalition which is the main opposition group called for Western nations impose a no-fly zone sanctions to stop such attacks .

" Before the government warplanes halted , humanitarian disasters , regional instability and extremism will continue growing and continue to deteriorate , " said Munzer Aqbiq , an opposition presidential adviser , said in a statement .

Unlike in Libya in 2011 , the West has ruled out military intervention against Syria , which " forced" to hand over its chemical weapons stockpiles to be destroyed so as not to be used against the rebels .

Peace talks between the opposition and the government is scheduled to take place in Switzerland on January 22 .

National Coalition agreed to attend the talks , though still menuntuut that Assad step down , something that until now rejected by the regime that has ruled for more than 40 years , according to AFP .
Posted by needsjobslowongankerja at 10:53 PM