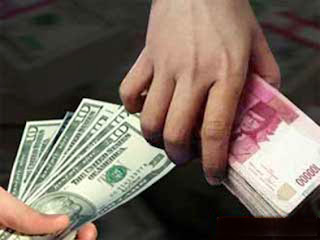 "The U.S. dollar moved back against the rupiah after U.S. economic data reinforced the view is pretty solid that the Federal Reserve will continue to reduce the stimulus program in the future , " said the Head of Research Investindo Futures Monex , Ariston Tjendra on Friday .

According to him, the U.S. data are strong enough to keep the appreciation of the U.S. dollar by the end of this year , and enough to convince investors that the Federal Reserve will undertake a financial stimulus reduction ( tapering off ) further .

"However , trading the forex market tends to thin given the absence of major events scheduled to take place in the rest of this week , " he said .

Bank Money Market Analyst Civil Society , Ruly Nova added a lack of positive sentiment of domestic re- pressing of the rupiah against the U.S. dollar following the focus of market players still see the money that Indonesia's trade balance performance .

" Moreover , the implementation will be trimming the U.S. central bank 's financial stimulus to 75 billion dollars from 85 billion dollars to make U.S. dollar liquidity getting tighter , " he said .

However , he added , the rate of the rupiah still has the potential gains against the U.S. dollar as transaction activity began to decrease in the money market to sell dollars speculation .

Posted by needsjobslowongankerja at 10:22 PM