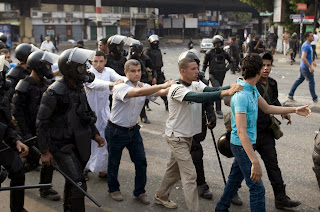 
The Egyptian government on Thursday established that the people involved in the demonstration will be initiated by the Muslim Brotherhood was sentenced to five years , the MENA news agency reported .

A spokesman for the Interior Ministry of Egypt , Hani Abdel - Latif , said anyone involved with a group of Brotherhood , which supports ousted President Mohammed Moursi , or promote these ideas could face up to five years in prison .

Furthermore , those who provide financial or other assistance to a group it will face punishment prohibited work force, he said .

The decision is based on Article 86 of the Criminal Code of Terrorism was made a day after the cabinet declare the Muslim Brotherhood as a terrorist group .

The article , as reported by Xinhua , said " the punishment could be increased weight into the death penalty, forced labor or imprisonment for life " .

In the same context , the Cairo Criminal Court on Thursday decided to form a six court will prosecute the accused of terrorism and violence .

Earlier on Thursday, at least five people were injured in a bomb attack on a bus that passes in front of the school in Nasr , Cairo .

The blast occurred two days after a car bomb killed 16 people at the police headquarters in Mansoura , Dagahliya province .

Presidential Adviser , Sekina Fouad , said that the government had evidence of involvement in the explosion of the Muslim Brotherhood in Mansoura .

On the same day , dozens of supporters of the Brotherhood were arrested in a number of places , including Sharqiya , Gharbiya and Minufiva related to their involvement with terrorist groups .

They were arrested for being caught promoting the ideology of the Muslim Brotherhood as well as provoking people to fight against the army and police .

Ansar Beit Al - Maqdis , a group based in Sinai and was inspired from Al Qaeda , claimed responsibility for the attack and warned Manshoura the soldiers and policemen who work under the " coup regime " in order to leave his post .

They argued that the attack was carried out on Tuesday in response to the war being waged against the regime of Islamic law , even though the shed blood and sacrificed lives of their fellow Muslim brothers .
Posted by needsjobslowongankerja at 7:40 PM