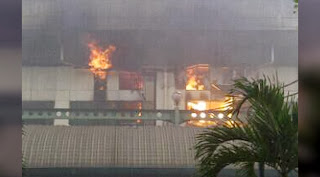 
One restaurant franchise in Gambir , Central Jakarta , Friday , at around 9:05 pm was on fire .

According to PT Kereta Api Indonesia via his twitter account @ KAI121 , all travel Railways and rail temporarily removed due to thick smoke .

Meanwhile, the Traffic Management Center City Police via the account @ TMCPoldaMetro said the fire has been extinguished by four fire Fire Department vehicles .

" Fire in the restaurant # Hokben , Sta . Gambir railway SDH was extinguished by 4 deposits , " according to a tweet in Twitter account TMC Police Friday at 9:46 am this morning .

The victim was taken to a nearby hospital for serious injuries .

Fire Hoka - Hoka Japanese restaurant Bento has kept the number of visitors to worry . Even so , the train journey and KRL had been going on as usual .

These fires are caused by LPG cylinder explosion around 9:00 pm .

Based on the observation , the electricity is turned off at Gambir Station for security reasons .

It appears some janitor cleaning up the remnants of the fire and mopping floors former firefighter spraying .
The line also mounted police around the scene .

Fires a fast-food restaurant in Gambir , Central Jakarta does not interfere with the activity of a train journey .

" Although there is a fire , there is no disruption to rail traffic activity and the fire has been localized KRL given by the fire department and our security guard muster , " said police chief Commissioner General Marlianto Gambir , at Gambir Station on Friday .

The fire was making traffic on the highway adjacent to the station , Jalan Medan Merdeka Timur , faltered for a moment .

Commissioner General appealed to all passengers at the station for calm .
" It is expected that all parties calm because fires have been addressed , " he said ..
| Ant
Posted by needsjobslowongankerja at 10:11 PM