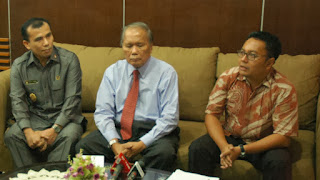 Indonesian Christian Church ( GKI ) Yasmin should be reopened if there is a mosque built next to it , said Bogor Mayor Diani Budiarto in a letter to the Presidential Advisory Council on Wednesday ( 02 / 05 ) .
.
The idea was announced in a meeting between Albert Hasibuan , member of the Presidential Advisory Council ( Wantimpres ) Legal Affairs and Human Rights , representatives of GKI Yasmin , as well as by the Secretary General of the National Security Council ( Wantanas ) , Lt. Gen. Junianto Haroen , and one Deputy Wantanas , Major General TNI Hold Toruan .
The meeting was chaired by Albert Hasibuan .

Bogor city government closed the church in April 2010 and forced more than 300 people outside the congregation carry out the services in the church .

Bogor Mayor insists does not permit the use of the church , by reason of the establishment of the GKI Yasmin rejected by a group of community and local residents .
But now as long as there is a mosque next to it , the church will be opened again .

Diani said he had put forward the idea that in September 2011 , but the church refused.
breakthrough

" We think positive, maybe the mayor has been trying to communicate the idea of ​​the establishment of the Mosque near the church at GKI Taman Yasmin , like the Cathedral Church and the Istiqlal Mosque , but unfortunately , when the communication channel may not optimal , so there was no response . Yet for GKI Yasmin , both the content and concepts , points 5 official mayor's letter is a point of hope for resolving cases of GKI Yasmin , " Bona said .

" Regardless of whether the mayor had been trying to communicate the idea that the GKI Yasmin , and regardless of whether it is time GKI agree or not , that is important , now , we know that the idea Wantanas for law enforcement and maintenance of diversity in Indonesia , was the same as the idea mayor himself . 's good " , he said .

Albert Hasibuan expressed the same optimism . " This is a break through ( breakthrough ) . Wantimpres and Wantanas will try to coordinate further , that the similarity of this concept can be followed up by technical talks in more detail in the not too distant future . " Albert said .

" Wantanas will continue to try to oversee the process further along Wantimpres . Wantanas care about nationality issues . Indonesia must remain a law-abiding country at the same time strengthen the unity and integrity of the nation 's very diverse ," said Maj. Gen. Hold Toruan .

Previously , as a member of the Albert Hasibuan Wantimpres Legal Affairs and Human Rights has delivered for the notion Wantanas for GKI Yasmin case settlement , which refers to the principle of the rule of law and unity in diversity .

" This settlement is a fresh concept , a new and promising . 's Also in line with the statement of President Susilo Bambang Yudhoyono stressed that if there are non - legal settlement , should be in a way that does not violate the law . Mosque which was founded near the location of the church at GKI Taman Yasmin is manifestation of the concept of rule of law and diversity are maintained . " ( BBC )
Posted by needsjobslowongankerja at 8:36 PM