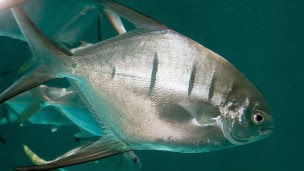 More than 40 people were injured when they were attacked by a herd of Palometa fish , carnivorous fish of the river which is a cousin of the piranha in Argentina .

The victim was bathing in the river to cool off on a hot day in the city of Rosario .

Swarms of carnivorous fish that attacked the people who were bathing , biting their arms and legs .
A little girl lost a finger .

Triggered air temperature
Scientists say fish which are found in the Parana River is becoming more aggressive on a hot day .
The incident is not the first attack Palometa mass in South America .

In February last year , swarms of attacking Palometa 20 people who were swimming in the river Toropi , in Rio Grande do Sul , Brazil .

The victim suffered injuries on their toes and hands . There also injured in the ear and face .
Environmentalists in Brazil when the suspect declining food supplies in the river causing these wild fish attacking humans . ( BBC )
Posted by needsjobslowongankerja at 8:12 PM